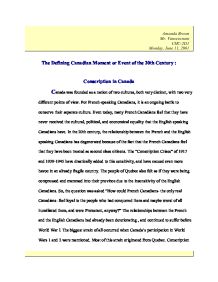 The Defining Canadian Moment or Event of the 20th Century : Conscription in Canada

Amanda Brown Mr. Vansevenant CHC-2D1 Monday, June 11, 2001 The Defining Canadian Moment or Event of the 20th Century : Conscription in Canada Canada was founded as a nation of two cultures, both very distinct, with two very different points of view. For French-speaking Canadians, it is an ongoing battle to conserve their separate culture. Even today, many French Canadians feel that they have never received the cultural, political, and economical equality that the English speaking Canadians have. In the 20th century, the relationship between the French and the English speaking Canadians has degenerated because of the fact that the French Canadians feel that they have been treated as second class citizens. The "Conscription Crises" of 1917 and 1939-1945 have drastically added to this sensitivity, and have caused even more havoc in an already fragile country. The people of Quebec also felt as if they were being compressed and crammed into their province due to the insensitivity of the English Canadians. So, the question was asked "How could French Canadians- the only real Canadians- feel loyal to the people who had conquered them and maybe worst of all humiliated them, and were Protestant, anyway?" The relationships between the French and the English Canadians had already been deteriorating , and continued to suffer before World War l. ...read more.

But, sooner or later the horrors of trench warfare changed this. In April 1917 Canadians fought at Vimy Ridge. In that month alone, more than 10000 Canadians died. Less than 5000 volunteered to join the army. The volunteer system was not recruiting enough soldiers to replace the losses. Even though Prime Minister Borden had promised not to introduce conscription, he felt he had no other choice other than to force men into joining the army. The enthusiasm over "Britain's War" was not shared by the French and they felt that they had no duty supporting them. The once optimistic outlooks that filled streets of Montreal in August of 1914 had quickly been replaced by " it's not Canada's war, Canada owes nothing to Britain and even less to France". This proves that conscription was the major Canadian event of the 20th century because we can still see that today, the turmoil between the English and the French, and it is over 80 years later. While the actual event of conscription was very important, another very important topic as to why conscription made the changes it did is Confederation. Secondly, the French response to conscription was one of negative attitudes. There was no love for Britain nor for France. To try and find the answer as to why there was such resentment towards Britain, it is necessary to go back and look at the roots of the problem : confederation. ...read more.

Borden's goal was to conscript 100,000 on top of the 85,000 men that were already serving the Canadian Corps; however only 2400 were at the front when the war ended. With all the men gone, wages dropped and thus creating the beginning of the depression. Possibly, these hard times could have been avoided if the government would have realized that the French were not interested in fighting in the war ; a type of program where the French Canadians could have participated at home by helping in farming and would have been better than having conscription. The French Canadians were not prepared to fight. They doubted the English ways and had many good reasons to. So, finally, the issue of the depression because of conscription could have possibly been avoided and both the French and the English Canadians could have possibly been happier if the French could have stayed home and helped there, and possibly the depression could have been minimized. This also proves that conscription was the defining Canadian moment of the 20th century. In Conclusion, the conscription of Canada created more problems then it really benefited us. Because of the Conscription of 1917, the confederation and the depression, all of these important events caused by conscription, the relations between the French and English speaking Canadians may be forever terminated. Whether we like it or not, it was a defining Canadian moment of the 20th century, and whether or not is was worth the loss is in the hands of the beholder. ...read more.