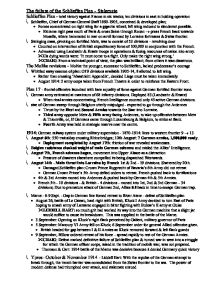 The failure of the Schlieffen Plan - Stalemate.

The failure of the Schlieffen Plan - Stalemate Schlieffen Plan - total victory against France in six weeks; ten divisions in east in holding operation ? Schlieffen, Chief of German General Staff 1890-1905, conceived & developed plan; * Forces concentrated on right wing for a gigantic wheel; left wing reduced to slenderest possible. * Extreme right pass south of Paris & cross Seine through Rouen ? press French back towards Moselle, where hammered in rear on anvil formed by Lorraine fortresses & Swiss frontier. ? Swinging mass, pivoting on fortified Metz, was to consist of 53 divisions - revolving door * Counted on intervention of British expeditionary force of 100,000 in conjunction with the French. * Advocated using Landwehr & Ersatz troops in operations & fusing resources of nation into army. * His dying words were: 'It must come to a fight. Only make the right wing strong.' * CRAIG: From a technical point of view, the plan was brilliant; from others it was disastrous. The Moltke revisions - Moltke the younger, successor to Schlieffen, lacked predecessor's courage ? Whittled away essence of plan: Of 9 divisions available 1905-14, 8 allotted to left wing. * Rather than crossing 'Maastricht Appendix', decided Liege must be taken immediately. * August 1914: 2 army corps taken from French Theatre in order to reinforce the Eastern Front. Plan 17 - frontal offensive launched with bare equality of force against German fortified frontier zone. ? German army estimated at maximum of 68 infantry divisions. Deployed 83 (Landwehr & Ersatz) * When rival armies concentrating, French Intelligence counted only 45 active German divisions. ? size of German sweep through Belgium utterly misjudged - expected to go through the Ardennes * Thrust by the First and Second Armies towards the Saar into Lorraine. * Third army opposite Metz & Fifth army facing Ardennes, to take up offensive between Metz & Thionville, or, If Germans came through Luxembourg & Belgium, to strike at flank. ...read more.

? German historians claimed Somme & Verdun fatally weakened army - Hindenburg line March 1917 1917 - Nivelle Offensive: Chamin des Dames 16-27 April - 187,000 French losses; 17 April mutinies * Mutinous French were only about 1% in total. Petain restored discipline at the cost of 23 mutineers * Nivelle replaced by Petain, who ruled out any more large-scale offensives - waiting for USA Passchendaele - 3rd battle of Ypres - 31 July to 7 December 1917 - British * drive Germans from Belgian coast and break out of Ypres salient * Planning and preparation - Fortnights' heavy bombardment that preceded the 'surprise attack had devastated the network of drains and dikes that prevented the area from becoming a swamp. * Meteorological reports had disclosed that heavy rain was a feature of August weather. * Battle: 31st July Haig launched the third battle of Ypres - Fifth army under Gough * Gough made 2 attacks in August - disastrous, reported to Haig that tactical success unlikely. * Heightened tensions between military under Haig & George's civilian administration * Replaced by Plumer: organised set-piece battles for September. Aided by weather. * The third attack, in October, afforded a passage on to part of Passchendale ridge. * Plumer & Gough - offensive should be halted - Belgian ports could not be reached before winter * Haig: wanted control of Passchendale ridge - more easily defended line for winter. * Campaign in early October to early November, hampered by atrocious weather, * The Canadians captured Passchendale village on 6 November, still not giving complete control of the ridge, but even Haig was persuaded to call a halt ? Results: 11 km for over 300,000 lives & 4.25 million shells; German Western Front losses 275,000. * Although British had advanced, Germans not demoralised and had not disappeared. * Haig's defence of the attrition: he gave the French army the quiet time they needed. ...read more.