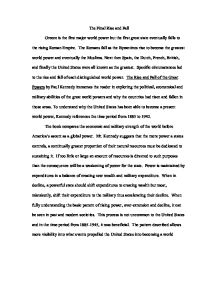 The Final Rise and Fall

The Final Rise and Fall Greece is the first major world power but the first great state eventually falls to the rising Roman Empire. The Romans fall as the Byzantines rise to become the greatest world power and eventually the Muslims. Next then Spain, the Dutch, French, British, and finally the United States were all known as the greatest. Specific circumstances led to the rise and fall of each distinguished world power. The Rise and Fall of the Great Powers by Paul Kennedy immerses the reader in exploring the political, economical and military abilities of the great world powers and why the countries had risen and fallen in those areas. To understand why the United States has been able to become a present world power, Kennedy references the time period from 1885 to 1942. The book compares the economic and military strength of the world before America's ascent as a global power. Mr. Kennedy suggests that the more power a states controls, a continually greater proportion of their natural resources must be dedicated to sustaining it. If too little or large an amount of resources is directed to such purposes than the consequence will be a weakening of power for the state. Power is maintained by expenditures in a balance of creating new wealth and military expenditure. ...read more.

So it is no surprise that by 1914, the United States had the highest national income per capita too. These factors combined with three years of war in Europe before America entered, gave the United States the environment it needed to succeed as one of the greatest world powers in an industrial sense. The circumstance for the US military at the time is rather different from the industrial situation. American industry was expanding rapidly, creating new wealth for the United States, while the military remained very small. In 1914, the Army was comprised of about 98,000 men with about half stationed overseas and the National Guard was about 27,000 at a time when the population was just under a million people. The United States' total army and navy force was only about 164,000. Compared to Europe, our military was no threat. About eighty percent of France's men and fifty percent of Germany's men within the draft age were enlisted. Russia's Army and Navy force was well over 1.35 million while Britain's own moderate force was about 571,000. The United States is fortunate to have two large oceans protecting their east and west borders while two peaceful countries lie on the north and south borders. The ability to be unconcerned with neighboring powers gave the United States the freedom to have a tiny army while obtaining its new wealth. ...read more.

The most effective reason the United States gained so much power is because of the wooden-headedness of the other world powers. After the American Civil War to World War II the great European powers wasted their individual resources, wealth and population with useless wars among other great powers. World War I was devastating for the European population. (Britain lost over 900,000 soldiers; France lost over 1.3 million, while Russia and Germany lost over 1.7 million soldiers each.) When the war ended the millions of men could not go back to work manufacturing goods in their home countries. In 1920, Europe only manufactured 77.3 percent of the amount it had in 1913. Thus while the European countries were recovering America was able to continue growing with less competition than prior to WWI and gained a great amount of power in the process. So while America had considerable resources to grow with, it also had an ideal environment to expand in. Throughout history different states have risen and fallen as world powers. The Rise and Fall of the Great Powers by Paul Kennedy allows the reader to be able to recognizing and understanding the pattern of the rise and fall of power. The pattern described allows more insight into what events propelled the United States into becoming a world power, the domestic and outside forces involved in such events, and how much of the process was natural versus wooden-headedness on the part of other global powers. ...read more.