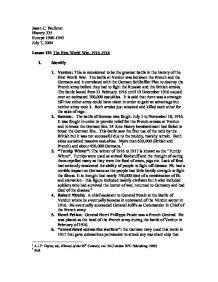 Jason C. Faulkner History 335 Europe 1900-1945 July 7, 2004 Lesson III: The First World War, 1916-1918 I. Identify 1. Verdun: This is considered to be the greatest battle in the history of the First World War. The battle at Verdun was between the French and the Germans and it correlated with the German Schlieffan Plan to destroy the French army before they had to fight the Russian and the British armies. The battle lasted from 21 February 1916 until 19 December 1916 caused over an estimated 700,000 casualties. It is said that there was a strategic hill that either army could have taken in order to gain an advantage but neither army took it. Both armies just attacked and killed each other for the sake of rage. 2. Somme:. The battle of Somme was fought July 1 to November 18, 1916. It was fought in order to provide relief for the French armies at Verdun and to break the German line. 24 June Heavy bombardment had failed to break the German line. This battle saw the first use of the tank by the British but it was not successful due to the muddy, marshy terrain. Both sides sustained massive casualties. More than 620,000 (British and French) and about 450,000 Germans. 1 3. "Turnip Winter": The winter of 1916 to 1917 is known as the "Turnip Winter". ...read more.

The battle was part of an unsuccessful German campaign to take the offensive on the western front. Both the French and German armies suffered an incredible loss of life and no strategic advantages were gained for either side. The Battle of Verdun is considered to be one of the most brutal events of World War I, and the site itself is remembered as the "battlefield with the highest density of dead per square yard."3 As a response to the German threat of invasion, France built a continuous line of sunken forts in the hopes that an invading army would not be able to maneuver through it. The line of fortifications extended from the Swiss frontier to the French city of Verdun, thus making Verdun a vital strong point for the French war effort.4 After the attack upon Verdun the war was at a stalemate with both sides suffering heavy loss of life. The same was true with the battle of the Somme. The battle of the Somme was a collaborative battle with the British and the French orchestrating a planned attack upon the German army in order to regain some territory and to destroy much of the German manpower. At first Joffre intended for to use mainly French soldiers but the German attack on Verdun in February 1916 turned the Somme offensive into a large-scale British diversionary attack. ...read more.

Many new developments came for this war, which would always change the methods of fighting wars. One of these industrial changes came with the growing popularity in the use of the Tank. At the beginning of the war the tank was used very scarcely but the further on the war lasted, the more the tank was used. Due to this the tank became manufactured by all of the major players in the war. The British and the Germans kept up with this section of the industrial revolution more than any other country. They developed the tank in vast quantities. This became good for both countries because it took more steel to be manufactured and it took workers to manufacture the tanks. The only failure to this plan was for the Germans. German men who could work in the factories became few and far between due to the fact that they were all fighting in the war. This made it difficult to manufacture goods at the same rate as some of the other countries. 1 A.J.P. Taylor, ed., History of the 20th Century, vol. 20 (London BPC Publishing 1969) 2 ibid. 3 4 Ibid. 5 W.B. Fowler, British American Relations 1914-1918 (Princeton University Press, 1969). 6 Truman, Cliff. The Impact of World War I on Germany (Oxford University Press, 1973). 7 Gilbert, Martin. The First World War. (New York: Henry Holt and Company) 1994. ...read more.