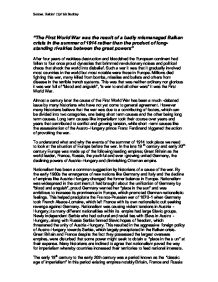 "The First World War was the result of a badly mismanaged Balkan crisis in the summer of 1914 rather than the product of long-standing rivalries between the great powers" After four years of reckless destruction and bloodshed the European continent had fallen to four once proud dynasties that brimmed revolutionary noises and political chaos that shook the world into disbelief. Such a war it was that it gradually involved most countries in the world but most notable were those in Europe. Millions died fighting this war, many killed from bombs, missiles and bullets and others from disease in the terrible trench systems. This was that was neither ordinary nor glorious it was war full of "blood and anguish", "a war to end all other wars" it was the First World War. Almost a century later the cause of the First World War has been a much-debated issue by many historians who have not yet come to general agreement. However many historians believe that the war was due to a contributing of factors, which can be divided into two categories, one being short term causes and the other being long term causes. Long term causes like imperialism took their course over years and years that contributed to conflict and growing tension, while short-term causes like the assassination of the Austro-Hungary prince Franz Ferdinand triggered the action of provoking the war. ...read more.

Convinced that their interests were threatened, the nations of Europe maintained large standing armies and increased their navy, which led to a naval race between the powers to win naval superiority. Britain stood proud with the largest and strongest navy in the world. Kaiser Wilhelm II admired the size of the British navy, he wanted to push forward the idea of an agreement with Britain in 1890, and he believed that Germany could be Britain's ally by showing Germany's support was strong and therefore crucial to her. In 1897 Admiral Von Tirpitz was appointed as head the German navy. Under Tirpitz the German navy greatly expanded after 1898, his theory was to build a navy large enough to inflict damage on an enemy sufficiently to deter a war. Germany was ambitious and wanted to become a naval power and would show she was worthy of Britain. However Germanys naval expansion threatened Britain's naval supremacy and thus diminishing Germany's intended friendship with Britain. Britain reacted by building up her navy too and produced her first Dreadnought battleship. These were heavily armed warships, which rendered previous ones obsolete. Britain's reaction to Germany's naval expansion led to an intensification of the naval race between the two powers. ...read more.

entered the war to regain her prestige. France entered in revenge in hope to retrieve her lost provinces Alsace and Lorraine. England in turn entered the war because an invasion of Belgium threatened her own security. These chain of reactions treats the mismanagement of the Balkans based on influences elsewhere. Although the mismanagement of the Balkans had a major effect it was not the one main reason, which led to the outbreak of war. What led to the summer of 1914 was a result of long standing rivalries fuelled by growing nationalism that were complicated further by the dangerous system of Alliances. The assassination of Franz Ferdinand provided a trigger cause resulting in the Balkan crisis; European powers were concerned with too many European issues to resolve the Balkan crisis. If it the Balkan crisis hadn't happened then war would probably have happened over something, European issues were deep rooted therefore war was inevitable. The leaders were na�ve when war did arrive; they were led to believe that it would be a short war and that it would "over by Christmas." No one contemplated that it would last four long years of each of the powers thought they would win, in the end no one came out best. Had they contemplated the consequence of a war, war may have been avoided. ?? ?? ?? ?? Salman. Hakim/ 12jt/ Mr Buckley ...read more.