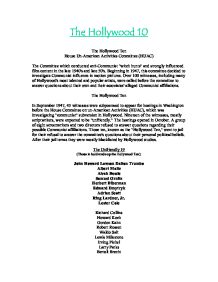 The Hollywood 10 The Hollywood Ten House Un-American Activities Committee (HUAC) The Committee which conducted anti-Communist "witch hunts" and strongly influenced film content in the late 1940's and late 50's. Beginning in 1947, this committee decided to investigate Communist influence in motion pictures. Over 100 witnesses, including many of Hollywood's most talented and popular artists, were called before the committee to answer questions about their own and their associates' alleged Communist affiliations. The Hollywood Ten In September 1947, 43 witnesses were subpoenaed to appear for hearings in Washington before the House Committee on un-American Activities (HUAC), which was investigating "communist" subversion in Hollywood. Nineteen of the witnesses, mostly scriptwriters, were expected to be "unfriendly." The hearings opened in October. A group of eight screenwriters and two directors refused to answer questions regarding their possible Communist affiliations. Those ten, known as the "Hollywood Ten," went to jail for their refusal to answer the committee's questions about their personal political beliefs. After their jail terms they were mostly blacklisted by Hollywood studios. The Unfriendly 19 (Those in bold made up the Hollywood Ten): John Howard Lawson Dalton Trumbo Albert Maltz Alvah Bessie Samuel Ornitz Herbert Biberman Edward Dmytryk Adrian Scott Ring Lardner, Jr. Lester Cole Richard Collins Howard Koch Gordon Kahn Robert Rossen Waldo Salt Lewis Milestone Irving Pichel Larry Parks Bertolt Brecht Waldorf Declaration Named for the meeting conducted by the leading studio heads in a Waldorf-Astoria Hotel after the HUAC held the Hollywood Ten in contempt of Congress. In this meeting they published a statement in which they fired the members of the Hollywood Ten and expressed their support of the HUAC. The studios, afraid to antagonize already shrinking audiences, then initiated an unofficial policy of blacklisting. Blacklisting in this case is the refusal of work to artists because of their alleged Communist beliefs or associations. Hundreds of people were fired from the industry, and many creative artists were never able to work in Hollywood again. ...read more.

In 1942, he wrote the script for the Oscar-winning documentary Moscow Strikes Back. Another documentary he wrote, The House I Live In won a special Academy Award in 1945. After refusing to cooperate with Congress in 1947, Maltz was sentenced to nearly a year in jail and was black-listed. Though he continued to anonymously contribute to scripts, Maltz received no credit until his final film Two Mules for Sister Sara. -- Sandra Brennan [from the All-Media Guide] * http://www.spartacus.schoolnet.co.uk/USAmaltz.htm * Biographical and credit information from the Internet Movie Database * This Gun for Hire (1942) * Destination Tokyo (1943) Video/C 999:1578 * Seeds of Freedom (1943) * Cloak and Dagger (1946) * The Naked City (1948) Video/C 999:1134 * Broken Arrow (1950) Video/C 999:1444 * The Beguiled (1971) * Scalawag (1973) * Hollywood on Trial (1976) Video/C 5751 Samuel Ornitz The son of a prosperous New York dry-goods merchant, Samuel Ornitz could have followed the lead of his two older brothers by entering the business world. Instead, Ornitz turned his back on the capitalist system, making his first "progressive" public speech at the age of 12. Gravitating to writing, he achieved success with his 1923 novel Haunch Paunch and Jowl, a witty memoir of Jewish immigrant life. In Hollywood from 1929, Ornitz's screen credits were generally confined to pleasant but unremarkable programmers for such studios as RKO and Republic. His chief claim to fame in Tinseltown was as an early organizer and board member of the Screen Actors Guild. He was also one of the most outspoken of Hollywood's left-wing community, alienating many of his more cautiously liberal friends by doggedly insisting that there was no anti-Semitism in Stalin's Russia (he later backed off on this assertion when confronted by the cold, hard facts). Ornitz hadn't had a screen credit in two years when, in 1947, he was ordered to testify before the House UnAmerican Activities Committee. ...read more.

His next try came two years later, when he challenged Sen. Robert M. LaFollette for the Republican nomination. He won, and in the fall became the junior senator from Wisconsin. His early years in the Senate were unimpressive, but in 1949, with several U.S. Cold War setbacks and an increasingly anti-communist political atmosphere at home, McCarthy found a cause. In February 1950, in Wheeling, West Virginia, he made the first of a series of claims that he had the names of "known communists" who were in the employ of the State Department. It was the beginning of a personal witch hunt for communists in the government that lasted for more than five years. McCarthy rarely provided any solid evidence to back up his claims, but in the political climate of the time his accusations and subsequent investigations nonetheless ended many a career and damaged a good number of lives. After winning re-election in 1952, McCarthy became chairman of the Permanent Investigations Subcommittee, a position he used to launch many of his investigations of government officials and agencies. He did not shy away from questioning the integrity of people such as George C. Marshall, or even President Eisenhower. The latter disliked McCarthy intensely but refused to "get in the gutter with him" and never denounced the senator publicly. However, by 1953 a seemingly out-of-control McCarthy was making many enemies. His investigation of the activities of an Army dentist, Maj. Irving Peress, eventually led to his downfall. In 1954, the Army launched its counterattack, charging that McCarthy was seeking preferential treatment for a consultant, David Schine, who in 1953 had been drafted into the Army. Eventually McCarthy's own subcommittee decided to hold hearings on the matter, the Army-McCarthy hearings. The televised hearings fully exposed McCarthy as irresponsible and dishonest. In December 1954, the Senate voted to censure him. McCarthy never repented, but he quickly descended into irrelevance and alcoholism. He died of a liver ailment in Bethesda, Maryland, on May 2, 1957, at age 47. ...read more.