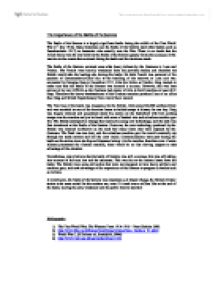 The importance of the Battle of the Somme

Therefore the heavy bombardment of the German trenches produced less of an effect than Haig and British Expeditionary Force would have wanted. The First Day of the battle was disastrous for the British, with around 60,000 soldiers killed and was recorded as one of the heaviest losses to british troops in history for one day. Haig was hugely critisied and questioned about his tactics on the battlefield with him sending troops over the trenches only to be faced with rows of barbed wire and relentless machine gun fire. The British attempted to change their tactics by using new technology, and the tank was first introduced at the Battle of the Somme. ...read more.

Nevertheless, many believe that the battle of Somme was still a success; this was still taking into account of the men lost and the stalemate. This was due to the lessons learnt from the battle. The British were using old tactics that were not designed to face heavy artillery and machine guns, and took advantage of the experience of the Somme to progress in battles such as Amiens. In Conclusion, the Battle of the Somme was important as it helped change the British military tactics to be more suited for the modern era, even if it took over a million lifes at the end of the battle, leaving the army weakened and the public forever shocked. ...read more.