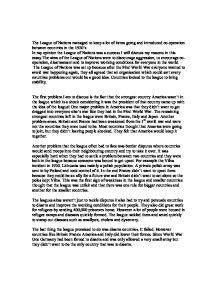 The League of Nations managed to keep a lot of items going and introduced co-operation between countries in the 1920&amp;#146;s.

Most countries thought that America were going to join, but they didn't leaving people shocked. They felt that America would keep it together. Another problem that the league often had to face was border disputes where countries would send troops into their neighbouring country and try to take it over. It was especially hard when they had to settle a problem between two countries and they were both in the league because someone was bound to get upset. For example the Vilna incident in 1920. Lithuania was mainly a polish population. A private polish army was sent in by Poland and took control of it. In the end France didn't want to upset them because they could be an ally for a future war and Britain didn't want to act alone so the poles kept Vilna. ...read more.

They also did great work for refugees by sending 400,000 prisoners home. However a lot of people were housed in refugee camps and diseases quickly formed. The league tackled them and acted quickly to stamp out diseases such as smallpox, cholera and dysentery. The last thing the league promised to do was disarm countries. It failed. However countries like Britain France America and Italy did lower their forces. Since World War One Germany had been forced to disarm and was only allowed a very small army but they didn't want to be the only country that was to disarm. In conclusion I think that the league was quite successful. It failed on disarmament and wasn't very good at settling border disputes but it did do well considering the U.S.A wasn't part of it and did have a big effect on the refugees and prisoners. ...read more.