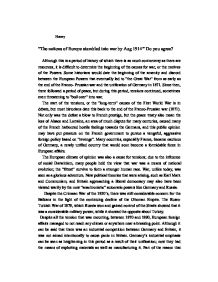 &quot;The nations of Europe stumbled into war by Aug 1914&quot; Do you agree?

History "The nations of Europe stumbled into war by Aug 1914" Do you agree? Although this is a period of history of which there is as much controversy as there are resources, it is difficult to determine the beginning of the causes for war, or the motives of the Powers. Some historians would date the beginning of the amenity and discord between the European Powers that eventually led to "the Great War" from as early as the end of the Franco- Prussian war and the unification of Germany in 1871. Since then, there followed a period of peace, but during this period, tensions continued, sometimes even threatening to "boil over" into war. The start of the tensions, or the "long-term" causes of the First World War is in debate, but most historians date this back to the end of the Franco-Prussian war (1871). Not only was the defeat a blow to French prestige, but the peace treaty also mean the loss of Alsace and Lorraine, an area of much dispute for many centuries, caused many of the French harboured hostile feelings towards the Germans, and this public opinion may have put pressure on the French government to pursue a vengeful, aggressive foreign policy based on "revenge". Many countries, especially France, became cautious of Germany, a newly unified country that would soon become a formidable force in European affairs. ...read more.

and internal affairs, however, but by 1902, perhaps as its colonies and home, Britain, was affected by European relations, broke out of its isolationism by aligning with Japan in 1902. These long-term causes for war, which do, by all means explain why there should be resentment behind a war, does not explain why the war broke out a particular time, or why the Powers allied as it did. At this stage, although to many, war seemed inevitable and only a matter of time, improved communications and relations between the Great Powers was not impossible, as the cordiality in early 1914 shows. However, although there was now feelings of animosity that may have affected international relations, they only really serve to illustrate the reasons for resentment. In themselves, the long-term causes are not sufficient to war over, or to cause a war of such large scale. None of them show that any one country had the aim of starting a war, although some, like Germany may have been prepared to go to war to achieve their means. Also, the Alliance system, which is often pointed out to be the Powers planning to go to war, have been overstated. Much of the "alliances" were merely understandings, sometimes even omitting any military related issues, that may have sought only better relations. The Anglo-French Entente Cordiale of 1904, for example, was simply an understanding. ...read more.

Europe was certainly preparing for a war by August 1914. Some even looked forward to it, inspired by Jingoism and by the years if resentment of other countries. However, war was not inevitable. The improved relations between Britain, France and Germany in early 1914 show this. Even after the July Crisis, no country went to war unwittingly or unintentionally. By this time, it is clear that most countries wanted war, perhaps to sort out internal problems or to end all the surmounting tension "by Christmas". Even after the July Crisis, war did not have to be an option as there was no formal military obligation to do so, nor were the Balkan problems so significant that the Powers have to go to war over hostility and possible war between Austria-Hungary and Serbia. Many even see Britain defending Belgian neutrality as a means of joining the war. Although it can be seen as some countries, such as France, had no other choice but to defend itself when Germany declared war on them, they still knew the implication of siding with Russia and by introducing conscription, they showed that they were prepared. I don't think that the nations of Europe "stumbled into war" as they did know what they were doing, many wanted it, and they had other alternatives to avoid war, but most headed straight for it. ...read more.