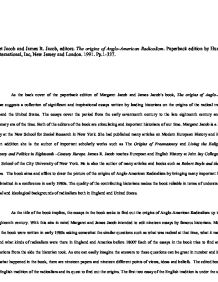 The origins of Anglo-American Radicalism - review

Margaret Jacob and James R. Jacob, editors. The origins of Anglo-American Radicalism. Paperback edition by Humanities Press International, Inc, New Jersey and London. 1991. Pp.1-337. As the back cover of the paperback edition of Margaret Jacob and James Jacob's book, The origins of Anglo-American Radicalism suggests a collection of significant and inspirational essays written by leading historians on the origins of the radical tradition in England and the United States. The essays cover the period from the early seventeenth century to the late eighteenth century and French Revolutionary era of the time. Both of the editors of the book are stimulating and important historians of our time. Margaret Jacob is a Professor of History at the New School for Social Research in New York. She had published many articles on Modern European History and its subject matters in addition she is the author of important scholarly works such as The Origins of Freemasonry and Living the Enlightenment Freemasonry and Politics in Eighteenth -Century Europe. James R. Jacob teaches European and English History at John Jay College and The Graduate School of the City University of New York. ...read more.

The rest of the six essays are about political aspects of the English Revolution and the formation of Radical thought at that time except from Phyllis Mack's Women as Prophets during the English Civil War, which differs from other essays in its subject and implications. The English tradition ends with two essays written by Nicholas Rogers and Robert W. Malcolmson, which are brought together under the subtitle of secular associations and Radical culture in the eighteenth century England. Robert Malcolmson's essay is about the workers and workers' combination in eighteenth century England and Nicolas Rogers's paper covers the subject of the urban opposition to Whig oligarchy between the years 1720 and 1760. The second half of the book is the part for the papers covering the American Tradition in analyzing radicalism and its origins and dimensions in terms of history. The keynote essay of this part is consisted of Alfred F.Young's paper that is under the title of " English Plebeian Culture and Eighteenth Century American Radicalism". In this paper Young tries to draw parallels between English Plebian Culture and American Radicalism of the time by finding roots and implications of English radicalism and its effect on American Radicalism of the eighteenth century. ...read more.

Finally, The Origins of Anglo-American Radicalism edited by two scholars is a book of Modern History and its subject area dealing with the intellectual, political, social and religious aspects of Radicalism with in the regions of England and America. As a secondary source the book provides a reliable knowledge about the subject that it covers as result of the quality of the historians who had contributed to the book with their nineteen papers, which were submitted and discussed in a conference in 1980. The nineteen essays of this successful historians covers a wide range and a great number of primary evidence to support their papers and ideas so this makes the book valuable in terms of taking as a source while searching the roots of radicalism concerning England and America and understanding the some events and concepts of the early seventeenth and late eighteenth century. As a secondary source, the book is also valuable because of its coverage of both England and America since it gives the advantage of compare and contrast and draw parallels between to countries related to the aspects of radicalism as a political, cultural and social movement. ...read more.