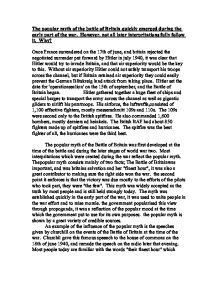 The popular myth of the battle of Britain quickly emerged during the early part of the war. However, not all later interpritations fully follow it. Why?

The popular myth of the battle of Britain quickly emerged during the early part of the war. However, not all later interpritations fully follow it. Why? Once France surrendered on the 17th of june, and britain rejected the negotiated surrender put forward by Hitler in july 1940, it was clear that Hitler would try to invade Britain, and that air superiority would be the key to this. Without air superiority Hitler could not safely transport his troops across the channel, but if Britain retained air superiority they could easily prevent the German Blitskreig land attack from taking place. Hitler set the date for 'operationsealion' on the 15th of september, and the Battle of Britain began. Hitler gathered together a huge fleet of ships and special barges to transport the army across the channel as well as gigantic gliders to airlift his paratroops. His airforce, the luftwaffe,consisted of 1,100 effective fighters, mostly messerschmitt 109s and 110s. The 109s were second only to the British spitfires. He also commanded 1,600 bombers, mostly derniers ad heinkels. The Britsh RAF had about 850 fighters made up of spitfires and hurricanes. The spitfire was the best fighter of all, the hurricanes were the third best. The popular myth of the Battle of Britain was first developed at the time of the battle and during the later stages of world war two. Most interpritations which were created during the war reflect the popular myth. Thepopular myth consists mainly of two facts; The Battle of Britainwas important, and was britains salvation and her "finest hour", it was also a great contributor to making sure the right side won the war. the second point it enforces is that the victory was due mostly to the efforts of the pilots who took part, they were "the few". This myth was widely accepted as the truth by most people and is still held strongly today. ...read more.

As the sources get further from the time of the battle of britain, there becomes less need for propogada , and the writer is also able to take a view in retrospect. the first interpritatin which differs from the popular myth of the bob is interpritation number 7, an article by sir arthur bryant in the Daily Graphic in 1944. Ath this point, the war was not yet over, but after the D-day landings the allies new they were goin to win the war, and so propoganda was much less important. This extract mentions the popular myth, as this was the largely supported view of the battle at the time and would have been against the publics view to omit this factor of the battle. It also mentions other factors which contributed to Britains vicory such as the use of radar and the well organised ground staff. This article was written by Arthur Bryant, who was known to be very traditional and patriotic in his views, this may have caused the interpritation to be baised, but probably would not have been much of a factor as he is a historian and so he owuld have wished to show a fair and even handed account of the events in order to maintain his reputation as a credible author. This article was very popular, and so must have refected the popular mood of the people at the time and appealed to their ideas, we know this because it was reprinted as a pamphlet later on. This article shows great differences to those of a few years before in that it brings in factors other than the importance of the pilots and also mentions the severe civilian casualties. The extract from Grand Strategy, an official history of the war authorised bythe government and written by JRM Butler in 1957. By this time the war had been over for years and so it would not need to be influenced in any way towards propoganda. ...read more.

The sources from the period during the war, all perpetuate the populare myth, and to a great extent, leave out vital factors in Britains survival. The sources are all extremely influenced by bais and the need for propoganda at the time especialy Chrchills speeches, this lessens their credibility significantly. To discount the wartime interpritations entirely would not give an accurate picture of events as these did reflect the popular mood of the people and were all first hand evidence. The bob was important in the survival of britain, which allowed them to facilitate the D-day landings, their survival was largely due to the RAF, as this was well organised and far superior to the Luftwaffe. the interpritations also fail to mention the aid of the people from other nations in the commonwealth, for example the first and third top scoring pilots were from checoslovkia and newzealand. The later interpritations are more even handed with no need for bais or propoganda, so they portray a more accurate picture of the events. I believe that although Hitler was intent on atacking Russia, the attack on Britain was still very important. I believe that German miscalculation was the main factor in ensuring Britains survival, as the British were near defeat, but the Germans did not know this so they halted the attack. I do not believe that the bob was totaly unimportant as sources 12 and 15 suggest. The British did not win a victory at the bob, they merely, aided by German miscalculation and preocupation with Russia, managed to fend off invasion and survive by the skin if their teeth. The military commanders such as Dowding were a great help in organising a defence, and the ground forces including radar helped slightly. though the pilots won many air battles, this was mainly due to their superior planes, as some of the pilots had as little as two weeks training it cannot be said that they were experienced or any more skilled than the German pilots. ...read more.