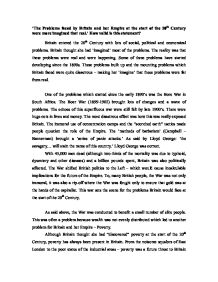 The Problems faced by Britain and her Empire at the start of the 20th Century were more imagined that real.' How valid is this statement?

'The Problems faced by Britain and her Empire at the start of the 20th Century were more imagined that real.' How valid is this statement? Britain entered the 20th Century with lots of social, political and economical problems. Britain thought she had 'imagined' most of the problems. The reality was that these problems were real and were happening. Some of these problems have started developing since the 1890s. These problems built up and the mounting problems which Britain faced were quite disastrous - making her 'imagine' that these problems were far from real. One of the problems which started since the early 1890's was the Bore War in South Africa. The Boer War (1899-1902) brought lots of changes and a wave of problems. The echoes of this superfluous war were still felt by late 1900's. There were huge cots in lives and money. The most disastrous effect was how this was really exposed Britain. The immoral use of concentration camps and the "scorched earth" tactics made people question the role of the Empire. ...read more.

Furthermore, there were cases in which people were unable to work because of poor health - thus ruining the profits of Britain. Moreover, the poverty in Britain also led to changes in the political world. After Britain "discovered" poverty, the Liberal welfare reforms were carried out from 1908 onwards. This led to the emasculation of the powers of the House of Lords and led to the demise of the Liberals where the Labour Party seized power. This however, did not reduce the effects of poverty. Poverty was still happening in Britain and was a problem which was 'real' and clearly not 'imagined' as it was constantly present in Britain. The effects of the Boer War and poverty were subtle - they were felt as the Empire aged. The resonances of the War and the shocking poverty certainly brought a wave of incalculable problems which Britain must face in the early 20th Century. As the Boer War brought a wave of 'panic attacks,' poverty on the other hand reduced profits and allowed Britain's "competitors" - USA and Germany - to catch up. ...read more.

Britain indeed felt the threat and the change in world powers and she was no longer indeed the 'Number One Nation.' This was a problem which was far more 'real' than imagined. In conclusion, the problems were far more real than imagined. The Boer War shattered 19th Century complacencies and set the scene for future problems up to the First World War. Poverty, on the other hand, revealed the shocking reality behind the glittery glamour of the British Empire and brought incalculable implications for the future of the Empire. The rise of Germany and USA was another problem which led to the loss of British supremacy, especially her economic power. Most of these problems brought more problems to mount up which gave the leaders in Britain in the early 20th Century the impression that they had 'imagined' these problems. In reality the problems which they faced in the early 20th Century were the "after-shock" effects of the previous problems. Therefore, the problems were, in actual fact, real. To concluded, I think that the statement in the question is invalid on most of the problems faced were real. ...read more.