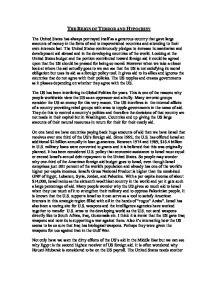 The Reign of Terror and Hypocrisy

THE REIGN OF TERROR AND HYPOCRISY The United States has always portrayed itself as a generous country that gave large amounts of money in the form of and to impoverished countries and attending to their own interests last. The United States continuously pledges to increase humanitarian and development aid abroad and in the developing countries of the world. Looking at the United States budget and the portion contributed toward foreign aid it could be agreed upon that the US should be praised for being so moral. However when we take a closer look at where the aid actually goes to we can see that the US is not satisfying its moral obligation but uses its aid as a foreign policy tool. It gives aid to its allies and ignores the countries that do not agree with their policies. The US topples and creates governments as it pleases depending on whether they agree with the US. The US has been interfering in Global Politics for years. This is one of the reasons why people worldwide view the US as an oppressor and a bully. ...read more.

It is known that the U.S. supports Israel so it can serve as a tool to satisfy American interests in this strategic region filled with oil in the hands of "rogue" Arabs". Israel has also been a testing site for U.S. weapons and the intelligence agencies have worked together to transfer U.S. arms to the developing world as the U.S. not send weapons directly like to South Africa, Iraq, Guatemala etc. I think it is ironic that the US gave Iraq weapons and now its is supporting a war against them. Also it's interesting how the US seems to be so sure that Iraq has biological weapons. Perhaps they were given the weapons for use against Iran in the Gulf War. Not only have we seen the dirty effects of the US's aid in the Middle East but we can see why Egypt is the second highest receiver of US foreign aid. It is often wondered why Housni Mubarak is considered to be on the US payroll. The United States needs another ally in the Middle East and Egypt is their ally. ...read more.

It is obvious that the US looks at its own interest above all others. A perfect example of this is when the US provided the Afghan children with books. The world thought "how generous", while the US politicians rubbed their hands with glee as the books were filled with violent images to incite the children to be violent so they could serve US interests by exiling the Russians out of Afghanistan. Their military might and their power has made them a force to be reckoned with and most countries side with the United States. The US has formed an empire where presidents shiver t the mention of the name George Bush or whoever sits in the White House. We have seen the US's power numerous times in Hiroshima, Nagasaki, Desert Storm etc. We have also seen the covert operations by the FBI and CIA to provide military aid to countries. Finally, we have seen the legal grants and aid given to US supporters. It is clear that the United States exercises power over the world and is today's superpower. As Bush said "Either you are with us or against us" any smart country would be with the United States. ...read more.