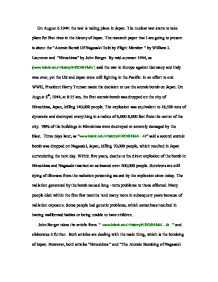 The research paper that I am going to present is about the &quot;Atomic Bomb Of Nagasaki Told by Flight Member &quot; by William L Laurence and &quot;Hiroshima&quot; by John Berger. By mid-summer 1944.

On August 6 1944: the war is taking place in Japan. The nuclear war starts to take place for first time in the history of Japan. The research paper that I am going to present is about the "Atomic Bomb Of Nagasaki Told by Flight Member " by William L Laurence and "Hiroshima" by John Berger. By mid-summer 1944, as (www.lclark.edu/~history/HIROSHIMA/ ) said the war in Europe against Germany and Italy was over, yet the US and Japan were still fighting in the Pacific. In an effort to end WWII, President Harry Truman made the decision to use the atomic bomb on Japan. On August 6th, 1944, at 8:15 am, the first atomic bomb was dropped on the city of Hiroshima, Japan, killing 140,000 people. The explosion was equivalent to 18,500 tons of dynamite and destroyed everything in a radius of 6,000-8,000 feet from the center of the city. 98% of the buildings in Hiroshima were destroyed or severely damaged by the blast. Three days later, as "www.lclark.edu/~history/HIROSHIMA/ - 4k" said a second atomic bomb was dropped on Nagasaki, Japan, killing 70,000 people, which resulted in Japan surrendering the next day. Within five years, deaths to the direct explosion of the bomb in Hiroshima and Nagasaki reached an estimated over 200,000 people. Survivors are still dying of illnesses from the radiation poisoning caused by the explosion since today. ...read more.

You can get the point of view, which is the violence that John Berger is trying to represent through the whole assay. Eyewitnesses' stories that the author used like "When I looked out of my window, I saw a several women to coming .........Hiroshima prefecture hospital" in the article make us feel like being in the position of those people that lived at the time that the atomic bomb killed their families. It makes us to feel like we are in the position that nobody wants to be in. Imagine seeing the person that you love, the person that had raised you on her side, your family and everything you have, disappear in a second. Imagine all of this with nothing that you can do to help them. That makes us feel the pain that all these people felt, the pain that each of us felt after the September 11 when terrorists attacked our country. That is the pain, which nobody is going to forget for the rest of his or her life and especially for those who lost good friends and people from their family. The author in the article is talking about a terrorist attack, is talking about a small amount of people who made this terrible murder in Japan. The author is trying to explain that that was a terrorist attack by using "The calculation was terrorist. ...read more.

He is talking about the temperature that destroyed the plans for dropping the A-bomb. He is not talking about the temperature that A-bomb produced and killed million of people. However, even if William L Laurence does not measure the chaos and the catastrophe from the dropping of the atomic bomb in Nagasaki, he measures how the atomic bomb is different from other bombs. He said "will be wiped off the map by the greatest weapon ever made by man"(page 250) that shows us how strong that the bomb was compared to general bombs. The strong wind generated by the bomb destroyed most of the houses and buildings within 1.5 miles radius. Also the author described how the atomic bomb looked from forty five thousand feet. He said "The mushroom top was ever more alive than the pillar...."(page 252). What he described again showed how strong the bomb was. Within that radius what ever is alive the strong wind generated by bomb destroyed everything. Finally even if both article's points of view are different between each other, both are relative between. However, the atomic bomb that Americans invented and used in WWII cost the pain for the inhabitants. As I wrote above about the chaos and the catastrophe from the atomic bomb, it will stay forever in our history. It will stay forever to remind us that every war left behind a lot of dead, wounded and ill people. I hope that that war was the last one that people used nuclear weapons. ...read more.