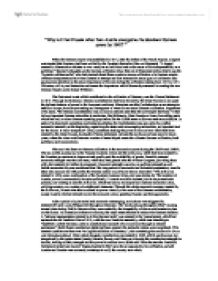 The Role of Bismarck in the German Confederation

"Why is it that Prussia rather than Austria emerged as the dominant German power by 1867? " When the German empire was established in 1871, after the defeat of the French Empire, a legend was created that Germany had been unified by the Prussian chancellor Otto von Bismarck. "A legend created by Bismarck to minister to own vanity as an individual and to the cause of his indispensability as a politician." Seaman's thoughts on the German unification show that not all historians believe that it was the "dynamic ruthless realist" who had planned ahead these events to ensure unification of a German empire. Different interpretations have been created to attempt and find Bismarck's actual goal of unification also paying close attention to the actual importance of his role during the unification lasting from 1815 to 1871. This essay will try and determine and assess the importance which Bismarck possessed in creating the new German Empire under Kaiser Wilhelm I. The first actual event which contributed to the unification of Germany was the Vienna Settlement in 1815. Through its decisions a German confederation had been formed by the Great Powers to not upset the delicate balance of power in the European continent. Historians see this Confederation as an attempt to stabilize Europe, but also preventing any emergence of wants for an actual German unification. ...read more.

This smart political move cornered Austria in a hopeless situation, as at the negations in Gastein, Bismarck managed to gain a diplomatic victory. Bismarck had managed to corner Austria, ensuring that the 'German conflict' was going to be resolved in near future. War was delayed until 1866, due to Bismarck's fear of "the German population" and "the French neutrality of Napoleon III." War finally broke out after Bismarck had ensured French neutrality, and with the Prusso-Italian treaty, which ensured that Austria was to be forced into a two-front war. Seaman considers that "The Prusso-Italian treaty made it almost certain that Austria would fight, by making it impossible for her to strike bargain." Austria was crushed in the following 7 week war, and signed a peace treaty which was asked for by Napoleon III. Bismarck had managed to gain control over the whole of Northern Germany, founding the North German Confederation, and had also secured the loyalty of the southern German states, in case of a war against France. Through the lenient treaty offered to Austria, Prussia had also secured the neutrality of the empire in case of further conflicts. Prussia's views then wondered over to fully unifying the German "nation" under its control, and this was only possible by beating the French in a military situation. ...read more.

However, one important aspect has to be considered, as indirectly Bismarck did support German unification. He didn't want to, but he indirectly achieved it by fulfilling all the actions to enlarge Prussia, he 'accidentally' created a German empire, which he saw as the new Prussian one. When concluding about Bismarck's role and importance in German unification, when deeply analyzing the question, Bismarck was not trying to unify Germany but to expand Prussia. He even stated this in 1862 before he became Prussian chancellor: "I will take the first opportunity to declare war with Austria... give Germany a national union under the leadership of Prussia." The emphasis here lies in the words 'under the leadership of Prussia.' In spite of the different objective, he was indirectly important, as the whole political situation for the unification of Germany was under his influence. He controlled central Europe, militarily and politically with Prussia, suggesting wars against Austria and France enabling the independence of the German state. The role in the economic success was not as major not being able to have a key influence, but as Lee remarked the political situation became more important during the 1860's, when Bismarck entered the scene. He was supported by many sides, militarily, economically and politically during his reign, but his influence is very important, as it were his idea's which he followed. Bismarck can therefore be seen as the 'unwilling unifier of Germany' with different intentions. ?? ?? ?? ?? ...read more.