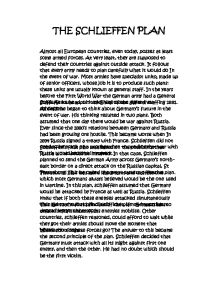 The schlieffen plan &quot;What was meant to happen&quot;

THE SCHLIEFFEN PLAN Almost all European countries, even today, posses at least some armed forces. At very least, they are supposed to defend their countries against outside attack. It follows that every army needs to plan carefully what it would do In the event of war. Most armies have specialist units; made up of senior officers, whose job it is to produce such plans: these units are usually known as general staff. In the years before the First World War the German army had a General staff. At its head, unit 1906 was count Alfred von schlieffen. Schlieffen was appointed Chief of the general staffing 1881. At once he began to think about Germany's future in the event of war. His thinking resulted in two plans. Both assumed that one day there would be war against Russia. Ever since the 1880's relations between Germany and Russia had been growing ore hostile. ...read more.

The Germans had in fact done this in 1870-71, a victory in which schlieffen himself had taken part. Second, schlieffen believed that he would have quite a long time - perhaps two months - to destroy the French army. He did not believe that the Russians could organise an attack against Germany in that time. If Germany could defeat France quickly, it would be able to transfer its victorious army against the Russians and launch an offensive against St Petersburg. Naturally, there were many risks attached to this plan, and Schlieffen was well aware of them. The most obvious was that it might take longer than two months to defeat the French. If it did then the whole of Germany's eastern frontier would lie open to a Russian attack. Despite his worries, Schlieffen refused to solve this problem by leaving large German forces in the east to prevent a Russian attack if things went wrong. ...read more.

He knew that this would weaken the attack on France, and this certainly played on his mind. In 1906 schlieffen was replaced as chief of the general staff by Helmuth von Moltke. Moltke was unimpressed by thee changes that schlieffen had made to the plan. In 1911 he produced the third and final version. In this the attack on Holland was dropped.. Moltke never satisfactorily explained this decision. He also ignored Schlieffen's deathbed instructions - he withdrew soldiers from armies which were to attack in the west and placed them on Germany's eastern border to help guard against Russian attack. But he went even further. He removed still more men from the attacking force, and moved them to face France's border with Germany. He hoped that he could use them to attack France from another direction as well, and maybe even trap the French in a giant pincer movement. This was very optimistic, and it seriously weakened the force that was to go through Belgium. Nevertheless, this was the plan that Germany was to put into operation in 1914. The schlieffen plan "What was meant to happen" ...read more.