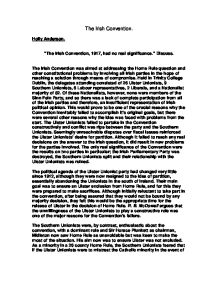 The Significance of the Irish Convention, 1917

The Irish Convention. Holly Anderson. "The Irish Convention, 1917, had no real significance." Discuss. The Irish Convention was aimed at addressing the Home Rule question and other constitutional problems by involving all Irish parties in the hope of reaching a solution through means of compromise. Held in Trinity College Dublin, the delegates attending consisted of 26 Ulster Unionists, 9 Southern Unionists, 6 Labour representatives, 2 Liberals, and a Nationalist majority of 52. Of these Nationalists, however, none were members of the Sinn Fein Party, and so there was a lack of complete participation from all of the Irish parties and therefore, an insufficient representation of Irish political opinion. This would prove to be one of the crucial reasons why the Convention inevitably failed to accomplish it's original goals, but there were several other reasons why the idea was faced with problems from the start. The Ulster Unionists failed to partake in the Convention constructively and conflict was ripe between the party and the Southern Unionists. Seemingly unresolvable disputes over fiscal issues reinforced the Ulster Unionists' desire for partition. Although it failed to reach any real decisions on the answer to the Irish question, it did result in new problems for the parties involved. ...read more.

As the Ulster Unionists wanted Westminster to deal with Ireland's taxation, and the Nationalists wanted Irish parliament to be able to have their own control, Redmond and conservative Nationalists were keen to accept Midleton's Liberal Convention Policy. It allowed an Irish parliament to control internal taxation, but gave control of custom duties over to Westminster. Initially it seemed like a settlement was finally on the horizon, but more extreme Nationalists, such as Devil and Bishop O'Donnell, rejected the idea and Redmond was forced to withdraw his support. The Nationalists were becoming divided and humiliated in defeat and Redmond decided that he could no longer be of service to the Convention. But he wasn't the only party leader facing a conflict within his own party. Unfortunately for Midleton, not all Southern Unionist members agreed with the idea of abandoning their plans of a Home Rule opposition. Outside of the Convention on 20th February, a group of Southern Unionists met in the Shelbourne Hotel in Dublin, deciding they would not give up the fight for the Union. Forming a new Unionist party called the Southern Unionist Committee, or the 'Callers,' they tried to have the Executive Committee of the Irish Unionist Alliance to stop Midleton's policy, but to no avail. ...read more.

L. Lyons argues that "the convention had two important consequences; firstly it forced Nationalists to realise that Ulster Unionists were not bluffing in their rejection of HR, and secondly it increased Sinn Fein's advantage over the Irish Parliamentary Party." [2.] The Irish Parliamentary party were once again undermined because of their failure to apply Home Rule with immediate affect. Redmond's support for Midleton's policy had cause the initial split in the party, leaving it weakened and an easy opponent for the rising Sinn Fein party. Sinn Fein made a smart political move in avoiding the conference, as their absence was perhaps more valuable to them in the long run than their participation would have been. The Irish Conference may not have worked through the Irish question and constitutional problems it had intended to solve, but it's clear that it did have some real significance. The conference further weakened and helped to destroy the Irish Parliamentary Party, after taking one final chance on a last concession, Redmond had failed once more and died 'knowing that he had failed to deliver Home Rule.' (Rees) The relationship between the Southern Unionists and the Ulster Unionists had been severely weakened and a partition in Ireland was made more likely. [1.] The Unresolved Question - Nicholas Mansergh [2.] Ireland Since the Famine - S. F. L. Lyons ...read more.