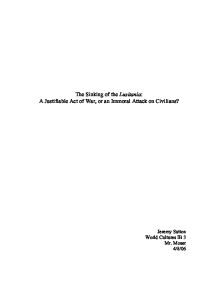 The Sinking of the Lusitania A Justifiable Act of War, or an Immoral Attack on Civilians?

The Sinking of the Lusitania: A Justifiable Act of War, or an Immoral Attack on Civilians? Jeremy Sutton World Cultures IB 3 Mr. Moser 4/8/06 A. Plan of Investigation In Febuary 1915, Germany declared the waters of the British Isles to be a war zone. Any ships, enemy or neutral, were at risk of being attacked, either intentionally or by mistake. On May 7, 1915, the Lusitania, a British passenger liner traveling off the coast of Ireland headed for Great Britain, was sunk by a torpedo fired by a German submarine. The attack killed 1,198 people, including 128 American passengers. The question is, was this attack on a liner carrying civilian passengers a justifiable act of war by the Germans, or was it an immoral, malicious attack on a neutral country's morale. In my judgment, I perceive the German attack to be valid and justifiable, considering many different facts and arguments that I will present. I will prove this thesis by using primary sources such as history books and internet articles. The history and text books offer straight forward facts about the event, and the internet articles offer arguments and debates on separate views of the attack. B. Summary of Evidence The quandaries being discussed in this dissertation are the moral and ethical issues concerning the sinking of the Lusitania. These dilemmas are still debated to this day. No one knows exactly what the German's were thinking when they attacked it; did they know it was a passenger liner and simply want to teach the world a lesson, or did they believe that the liner was an enemy cargo ship? ...read more.

(Droste, C4) However, this publication was written from an American point of view none the less, and uses some generalizations in their arguments. The facts are all from the information that the American government released, therefore may not be completely accurate. "The Germans are not a nation of poker players. Germany does not bluff." (Droste, C5) The second source that played a big part in my research was an article written by Henry Watterson. It provided me with a counterclaim to my thesis, condemning the Germans and accusing them of performing an atrocity of civilians from a neutral country. "With up most decorum, I condemn Germany for attacking the ocean liner and killing hundreds of non-combatants, including women and children. Must we sit down and let those fiends run over us like fanatic dogs?" (Watterson, 14) It is a valuable source in my essay because it was written just days after the incident, and completely condemns Germany, resting absolute responsibility on the German nation. "Are we at the mercy of the insane Wilhelm II of Germany, not only through his emissaries sending his odious system of government and debasing theories of casteism affecting superiority to our doors and proclaiming them, but bringing his war of conquest and murder across the line of our transit and travel over the high seas, which are ours to sail as we list, without let or hindrance from man or monarch, from him or from any one on land or water?" ...read more.

The Cunard Line knew of the impending dangers of the waters surrounding Britain, yet for the sake of profit, they chose to ignore the warnings and, instead, place their passengers in great danger. The Cunard Line also failed to inform their passengers that the Lusitania was short eighty to ninety crew members, had a defective turbine, and had narrowly escaped a submarine attack on its previous voyage. (Heyman, 115) How many of the passengers would have remained on the boat if the Cunard Line had not suppressed the truth? How many victims of the attack would have been spared? E. Conclusion In conclusion, restating my thesis, the sinking of the Lusitania was a justifiable and valid act of war. The passengers of the ship were previously warned by the German government to travel across seas at their own risk. It was the responsibility and fault of the U.S. government for transporting contraband munitions along with non-combatant civilians through the waters of a declared war zone. Fault also lies with the passengers who chose to board a ship carrying the British flag, through German infected waters, after numerous precautions and warnings. A break for the Germans that would make the attack permissible is if munitions were proved to have been stored on that ship. And proof is what we have. One torpedo. Two explosions. What caused the second explosion, making the great ship to sink so fast? What other explanation but contraband munitions? Therefore, there is proof that contraband munitions were stored on the Lusitania, rending the Germans legally and morally excused. ...read more.