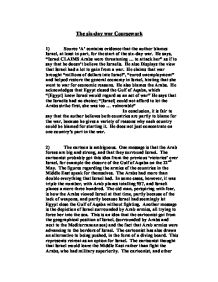 The six-day war Coursework 1) Source 'A' contains evidence that the author blames Israel, at least in part, for the start of the six-day war. He says, "Israel CLAIMS Arabs were threatening ... to attack her" as if to say that he doesn't believe the Israelis. He also Displays the view that Israel had a lot to gain from a war. He claims that war brought "millions of dollars into Israel", "cured unemployment" and helped restore the general economy in Israel, hinting that she went to war for economic reasons. He also blames the Arabs. He acknowledges that Egypt closed the Gulf of Aqaba, which "[Egypt] knew Israel would regard as an act of war" He says that the Israelis had no choice; "[Israel] could not afford to let the Arabs strike first, she was too ... vulnerable" In conclusion, it is fair to say that the author believes both countries are partly to blame for the war, because he gives a variety of reasons why each country could be blamed for starting it. He does not just concentrate on one country's part in the war. 2) The cartoon is ambiguous. One message is that the Arab forces are big and strong, and that they surround Israel. The cartoonist probably got this idea from the previous 'victories' over Israel, for example the closure of the Gulf of Aqaba on the 22nd May. The figures regarding the armies of the countries in the Middle East speak for themselves. The Arabs had more than double everything that Israel had. In some cases, however, it was triple the number, with Arab planes totalling 957, and Israeli planes a mere three hundred. ...read more.

5) Source H, although an individuals view, the position Israel was in. It was the fact that they "put their chances of survival at 50:50" that caused the Israelis to retaliate first. It is not all that useful as a source because it is a personal opinion, but it was describing his feelings before the war, and gives evidence that there is a lack of security in Israel, and there was not enough defence in the home country. He says "the school where I teach had no adequate air raid shelters" and "the port of Haifa was a sitting duck." Source I is useful because it provides photographic evidence that Russian supplied weaponry was being used by Egypt in Sinai, confirming two main causes of the six day war - the outside support of Middle East military operations and the open aggression of Egypt on Israel's borders. In conclusion, although the two sources are of different types, source H providing a subjunctive viewpoint written before the event, and I providing photographic evidence of a situation at the end of the war, both can be of some use to an historian studying causes of the 6 day war. 6) Source J was written by an Israeli official, and source K by the Egyptian prime minister. The views on the 6 - day war obviously differ greatly. One way in which the opinions differ is who actually started the war. Egypt blames Israel. "The Israelis mounted a heavy onslaught on Syria", whereas the Israelis laid blame on the Arabs and Russia. The ministry of foreign affairs says that the Syrians said, "Syria will never retreat from the...war to recover Palestine" and claims that the USSR "made and overheated situation worse" by supplying false intelligence to Nasser. ...read more.

Although Israel 'dropped the first bombs', on the 5th June, when "the Israeli air force attacked Egypt's airfields", the Arabs had been openly aggressive towards Israel. Syria said, "We have resolved to drench this land with your blood" Many of the places that Israel took in the six - day war, for example the Golan Heights and the Gaza strip, are still being fought over today, and consequently many people sympathise with specific sides, and so have biased opinions and views. This leads to lots of disagreement between historians, and instead of looking objectively at the evidence, and using hindsight to their advantage, they tend to be biased. Obviously different people, especially in the Middle East itself would have different views and be biased even if clashes were not still taking place. The Arabs, for example, blame Israel, saying, "The Israelis mounted a heavy onslaught on Syria" and also that "Israel...is trying to direct military blows at the Arab people". The Israelis blame the Arabs, who "were threatening her with destruction and were ready to attack her". They were openly aggressive and closed the Gulf of Akaba, and removed the UN buffer zone in Sinai. The west usually sides with Israel, because that is whom they backed during the early days of the dispute. Some people argue that other groups were indirectly to blame, such as the Nazis for driving Jews out of Germany and eastern Europe, and some blame Britain for agreeing to let Jews have Palestine, whilst also maintaining that the Arabs could keep it. In conclusion, the reason for the continuing disagreement over the Middle East is that it is not a clear - cut case. No party stands out as being solely to blame, but rather many countries and organisations contributed to the start of the six - day war. ...read more.