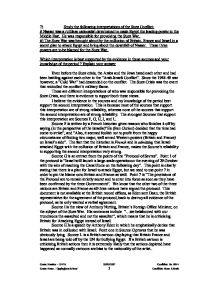 7) Study the following interpretations of the Suez Conflict: i) Nasser was a ruthless nationalist determined to make Egypt the leading power in the Middle East. He was responsible for provoking the Suez War. ii) The Suez War was brought about by the collusion of Britain, France and Israel in a secret plan to attack Egypt and bring about the downfall of Nasser. These three powers are to be blamed for the Suez War. Which interpretation is best supported by the evidence in these sources and your knowledge of the period ? Explain your answer Even before the Suez crisis, the Arabs and the Jews hated each other and had been battling against each other in the "Arab-Israeli Conflict". Since the 1948-49 war however, a "Cold War" had descended on the conflict. The Suez Crisis was the event that rekindled the conflict's military flame. These are different interpretations of who was responsible for provoking the Suez Crisis, and there is evidence to support both these views. ...read more.

This point is clearly stating that there is a plan for Israel to attack Egypt, but we need to use point 7 in order to pin the blame onto Britain and France as well. Point 7 is "The provisions of the Protocol are to remain strictly secret and to enter into force as soon as they have been confirmed by the three Governments". We know that the other two of the three nations are Britain and France as all three nations have signed the protocol. This document is not available at the British record offices, as Eden sent Dean, the British representative for the agreement of the protocol, back to destroy all evidence of the protocol, as he only wanted a verbal agreement. Source I is the view of Anthony Nutting, Britain's Foreign Office Minister, on the subject of the Suez War. His sentences include "...we belaboured with our truncheons the assaulted and not the assaulter", which means that he is criticising Britain for Attacking Egypt instead of Israel. ...read more.

This displays a hint of dictatorship. Also it appears that he may also only want control of the canal so that he can attain the money that it produces. Source C shows a photograph of the ships Nasser had scuttled in the canal in order to block the canal. On the face of it, this seems to be reliable evidence that this was an aggressive action by Nasser in a bid to aid his takeover of the Middle East. However, Source G powerfully shows that this first opinion is not the correct one to take. Source C states that Nasser had the ships sunk on the 31st of October. Source G extracts points from the Protocol of Sevres. Point one states that on the night of the 29th Israel would attack Egypt in order to reach the Canal the following day. Nasser must have been provoked by the Israeli invasion into blocking the canal in order to stop it being captured. Centre Number - 25176 03/05/2007 Candidate No. 9014 Centre Name - Uppingham School 1 Candidate Name C.Bush ...read more.