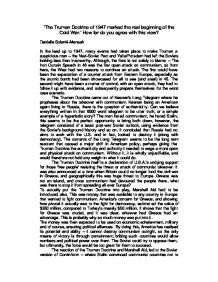 'The Truman Doctrine of 1947 marked the real beginning of the Cold War.' How far do you agree with this view?

'The Truman Doctrine of 1947 marked the real beginning of the Cold War.' How far do you agree with this view? Danielle Solanki-Mensah In the lead up to 1947, many events had taken place to make Truman a suspicious man - the Nazi-Soviet Pact and Yalta/Potsdam had left the Soviets looking less than trustworthy. Although, the East is not solely to blame - The Iron Curtain Speech in 46 was the first open attack on communism, so from here, the West had two reasons to continue an attack. The first could have been the expectation of a counter attack from Eastern Europe, especially as the atomic bomb had been showcased for all to see (and steal) in 45. The second might have been a matter of control, with an open attack, they had to follow it up with evidence, and subsequently prepare themselves for the worst case scenario. The Truman Doctrine came out of Keenan's Long Telegram where he prophases about the takeover with communism. Keenan being an American agent living in Russia, there is the question of authenticity. Can we believe everything written in that 8000 word telegram to be utter truth, or a simple example of a hyperbolic story? ...read more.

By doing this, America has realised its potential and ability - it cannot destroy communism outright, so the only means of victory is through containment; bribing such countries would allow numbers and political power over them. The Soviet could try to oppose them, but ultimately, the force would be too great for them to succeed. The reaction of the Truman Doctrine and Marshall Aid, led to the Soviet version of Cominform - where Stalin convinced communist countries not to take any aid from the West, as in due time, they would be victorious against them. He then went on further to allow the Berlin Blockade 1948. Such actions however, do not make a huge impact on an international level. The West is obviously thinking about the long term, by introducing policy and aid, whereas the S.U. seems to be countering such attacks, doing the minimum needed to survive. How can this be a war (at this stage) if America is making numerous open attacks engaging as many allies as possible, and the Soviet is only defending its territory after the West has made a move? ...read more.

In conclusion, I feel that there have been many incidences that could have sparked off a war at any time, but the point is it did not. At this time, it wasn't a Cold War as such, but more tension, and build up of future events to come. Each side expected a level a muscle flexing, and was therefore prepared to take as much as they were willing to give. America was working towards a co-existence of communism and democracy, as well was Stalin (and this is evident in the Truman Doctrine). At any time, threat of termination was countered with a defensive act that would ultimately lead back to the equilibrium that suited them both. However, I feel that it wasn't until the development of the atomic bomb by the Russians in 1949 that lead to the beginnings of the Cold War. America no longer had the upper hand, and fear of 'meeting their match' may have been a short term cause for the declaration of the NSC-68, which took a more aggressive view on communism. It looked to 'roll-back' communism, 'enforcing' that they were successful. This in my opinion, is the beginning of the Cold War, and it was the Truman Doctrine (as well as other key events) that lead to this situation in the late 1940's. ...read more.