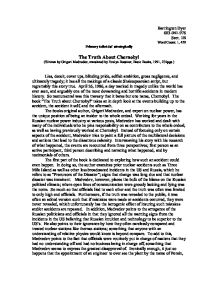 The Truth About Chernobyl.

Barrington Dyer 603-041-976 Sect. 1B Word Count: 1, 459 Primary toilet dsf strategically The Truth About Chernobyl (Written by Grigori Medvedev, translated by Evelyn Rossiter, Basic Books, 1991, 274pgs.) Lies, deceit, cover ups, blinding pride, selfish ambition, gross negligence, and ultimately tragedy; it has all the makings of a classic Shakespeareian script, but regrettably this story true. April 26, 1986, a day marked in tragedy unlike the world has ever seen, and arguably one of the most devastating and horrific accidents in modern history. So monumental was this travesty that it bares but one name, Chernobyl. The book "The Truth about Chernobyl" takes an in depth look at the events building up to the accident, the accident it self, and the aftermath. The books original author, Grigori Medvedev, and expert on nuclear power, has the unique position of being an insider to the whole ordeal. Working for years in the Russian nuclear power industry at various posts, Medvedev has worked and dealt with many of the individuals who he pins responsibility on as contributors to the whole ordeal, as well as having previously worked at Chernobyl. Instead of focusing only on certain aspects of the accident, Medvedev tries to paint a full picture of the multilateral decisions and actions that lead to the disastrous calamity. Interweaving his story with his research of what happened, the events are recounted from three perspectives; first person as an active participant, third person describing and narrating what happened, and by testimonials of others. ...read more.

The test was to see how long the kinetic energy of the blades of the generator connected to the reactor would continue to spin in the inertial rundown. This was of particular interest because in the event that the reactor had to be taken off line the inertial rundown could be used to power the reactor safety systems rather than having a secondary power source. This might not sound like a badidea at first but interestingly all other nuclear power plants in the region refused to do the experiment for fear it was to dangerous. Chernobyl was the only plant willing to do the experiment. This can be credited to the man in charge, Fomin. During the course of the experiment there were several actions committed that lead to the demise of the plant. The first and most critical was that the Emergency Core Cooling System (ECCS) was shut down. This was done so that the ECCS would not kick in while the experiment was being performed and potentially cause heat shocks which could damage the equipment. Once shut down, the ECCS could not be reactivated and thus if the reactor began to over heat it could not be cooled. Secondly, while the experiment began to go astray, the absorber rods that are used to control the reactor could not be lowered in because of system power loss. ...read more.

Second of all, Medvedev was never present in the control room before or during the accident, so, taking eye witness accounts, testimonials, and some intuition he attempts to reconstruct the events that occurred in a seamless narration. Putting all the pieces together what results is something less fluid and unified than piece mill and more like patchwork. Medvedev jumps around a lot going between past and present as well frequently going off on tangents, as a result he has a tendency to repeat himself in an attempt to remind the reader of what transpired prior to the tangent. Ultimately, however, Medvedev presents convincing warning to the use of nuclear energy and the necessity for heightened safety measures and precautions, reinforcing the idea of building reactors underground. Furthermore, Medvedev comments on the necessity for professional sense, this of course tying back to Toptunov who allowed his professional sense to evade him when he backed down to Fomin during the critical moments prior to the accident. Furthermore, Fomin himself showed no professional sense when he allowed his pride and ambition to get a head of him and was so focused on completing the experiment that safety became secondary. Fomin broke the golden rule of engineering and as result the highest price was paid, human life. Hopefully this will stand as a testimonial to all current and future engineers so that such a tragedy may not be repeated. ...read more.