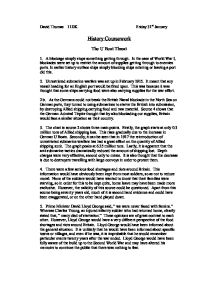 The U Boat Threat

David Thomas 11DK Friday 31st January History Coursework The U Boat Threat 1. A blockage simply stops something getting through. In the case of World War I, blockades were set up to restrict the amount of supplies getting through to enemies ports. In earlier history surface ships simply blocking ships entering or leaving a port did this. 2. Unrestricted submarine warfare was set up in February 1915. It meant that any vessel heading for an English port would be fired upon. This was because it was thought that some ships carrying food were also carrying supplies for the war effort. 2 b. As the Germans could not break the British Naval blockade in the North Sea on German ports, they turned to using submarines to starve the British into submission, by destroying Allied shipping carrying food and raw material. Source 4 shows that the German Admiral Tirpitz thought that by also blockading our supplies, Britain would face a similar situation as their country. 3. The chart is source 2 shows three main points. Firstly, the graph starts at only 0.3 million tons of Allied shipping loss. This rises gradually due to the increase in German U Boats. ...read more.

Many things could have changed Lloyd George's views over the twenty years in which it took him to establish his memoirs. 7. Government posters are designed to inform the public and create an image that is memorable and therefore constantly reminds the person of the Governments message. The most effective way to convey a message is in the form of pictures as they can be absorbed quickly and are easily remembered. The poster in source A9 has lots of writing and therefore cannot be remembered as easily. However, the poster uses mathematics and basic facts to emphasize how small amounts of waste can amount to great quantities of waste. Whether the figures are correct or not, this poster is good in that it makes the reader feel guilty about wasting food. Other posters including messages like 'save the wheat and help the fleet', use guilt and emotive blackmail to reduce waste. Simply explaining that it will save lives of sailors as well as the public does this effectively. In order to win the war, the Government needs to have full support of the public. For this to happen moral must be high. Therefore, posters must encourage people to save food without introducing fear of a shortage. ...read more.

Although Germany, unlike Britain, could still import from other countries linked by land, a large proportion of their resources came by sea. Propaganda was commonly used to discredit the enemy, as well as to encourage the public to save food and grow their own food. Rumours were started by the Government to increase public anger and disgrace towards Germany. These included how Germans made soap out of bodies. Adults were not the only ones to receive this propaganda. Patriotic books and toys were made for children, to encourage further support for the war effort. Another important factor in defeating the U Boat threat was threat the Germans did not have enough of them. Historian, Holger Herwig stated that with an average of twenty to thirty U Boats in the vast expanses of sea around Britain they were simply "insufficient do the job". However the German Admiralty may have realised that with a 50% loss rate they would have needed several hundred U Boats and they knew that the raw materials for U Boat building could be used elsewhere, such as in munitions and gun production. The Germans may have also been put off from building more U Boats as Britain quickly overcame the immediate threat with new technology. ...read more.