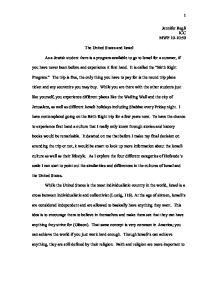 The United States and Israel

Jennifer Regli ICC MWF 10-10:50 The United States and Israel As a Jewish student there is a program available to go to Israel for a summer, if you have never been before and experience it first hand. It is called the "Birth Right Program." The trip is free, the only thing you have to pay for is the round trip plane ticket and any souvenirs you may buy. While you are there with the other students just like yourself, you experience different places like the Wailing Wall and the city of Jerusalem, as well as different Israeli holidays including Shabbat every Friday night. I have contemplated going on the Birth Right trip for a few years now. To have the chance to experience first hand a culture that I really only know through stories and history books would be remarkable. It dawned on me that before I make my final decision on attending the trip or not, it would be smart to look up more information about the Israeli culture as well as their lifestyle. As I explore the four different categories of Hofstede's scale I can start to point out the similarities and differences in the cultures of Israel and the United States. While the United States is the most individualistic country in the world, Israel is a cross between individualistic and collectivist (Lustig, 118). ...read more.

The United States armed forces are made up with a majority of men with the exception of some recent occurrences. In Israel, "The land is their 'promised land,' fighting for it is more important than life itself." In fact all Israeli Jews, men and women, are required to serve in the armed forces (Gibson). The military is extremely important. "Having the constant struggle to maintain their culture and land helps fuel the strong patriotic and spiritual movements" (Gibson). The government of both Israel and the United States are very similar, as they both have relatively low PDI scores. It is common in the United States for people to challenge authority, it happens in the classroom, in the household, and even towards the government. However, as common as it is for the United States, it is even more common for Israeli's. Though it is common to question authorities in Israel, rebellion against parents is rare, mainly because it is seen as rebellion against society and above all religion. While this may seem like a result of strict parenting, parents in Israel are extremely laidback (Gibson). A big difference in the two governments is the separation and lack of separation of church and state, while a similarity is the "belief in the importance of minimizing social or class inequalities (Lustig, 122). They tend to accept small power distances and a decrease of hierarchy. ...read more.

Israel also has a Memorial Day but it is nothing like the celebration the United States is used to. In Israel, the observation of Memorial Day is a very serious event. The entire country stands still for two minutes while sirens blare across the country to mourn and remember all soldiers and civilians who have died fighting for freedom (Gibson). This is not a day for cookouts or picnics as in the United States, no parties or festivities are held. After researching both Israel and the United States I came across some great information. Things I had never learned before. I had already imagined that they were very similar cultures but there are some great differences as well. Some of the information I was finding did not always agree with the Hofstede scale, but all in all it is a wonderful way to categorize the many different countries. Even after all this research and information I still have not fully decided whether I am going to attend the Birth Right program this year. I do though that if I decide to go I have a newfound cultural background and understanding to take with me. It is nice to know that not only is it more of a feminine country than the United States is, there is a great deal of equality. Hopefully if I do decide to attend the trip this summer I will no longer be a typical tourist, but I will now be a knowledgeable visitor. ...read more.