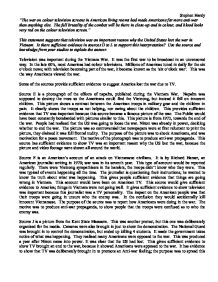 "The war on colour television screens in American living rooms had made Americans far more anti-war than anything else. The full brutality of the combat will be there in close-up and in colour, and blood looks very red on the colour television screen." This statement suggests that television was an important reason why the United States lost the war in Vietnam. Is there sufficient evidence in sources D to L to support this interpretation? Use the source and knowledge from your studies to explain the answer. Television was important during the Vietnam War. It was the first war to be broadcast in an uncensored way. In the late 60's, most Americas had colour televisions. Millions of Americas tuned in daily for the six o'clock news; with television becoming part of the war, it became known as the 'six o'clock war'. This was the way Americans viewed the war. Some of the sources provide sufficient evidence to suggest America lost the war due to TV. Source E is a photograph of the effects of napalm, published during the Vietnam War. Napalm was supposed to destroy the trees so the Americans could find the Vietcong, but instead it fell on innocent children. ...read more.

It has evidence to show that TV was deliberately brought in to promote an Anti-war feeling; the purpose was to spread this feeling. This was well reported on TV. This contributed to the peace movement and the end of the war. The purpose was to make the media take notice of the anti-war movement. The motive was for this to be reported on TV, so that the government would take notice. Because of the deaths, it became a big TV moment. Source L also provides evidence to that TV lost the war for the US. It is an interview with Don McCullen who was a British photographer, whose duty was to report the war, his pictures appeared on TV and the press. He initially took pictures that showed the Americans in a good light. His role changed while reporting, he took pictures showing Americans confused and the Vietnamese treated badly. He felt it was his duty to show what was happening in the war. His motive was to produce anti-war propaganda. This shows sufficient evidence because his pictures changed the opinion of what Americans saw happening. After seeing what was happening, they told the government what they though by protesting. ...read more.

In the poll it shows that Australians were initially in favour of the America continuing in the war, but later on they were in favour of them returning. The purpose is to show that the Australian's opinion of the war. This source is useless; the results of the poll would have never made it onto TV. The source is insufficient to show TV lost the war for the US. Americans are unlikely to care what the Australians thought. Television contributed greatly to the anti-war and anti-government feeling. Pictures coming from Vietnam showed initially good news, but later on news and TV became bombarded with anti-war propaganda. Once Nixon came into power in '69, he was forced to rethink America's position in the war. Due to the public's anti-war feeling and how badly the US was doing in the war, he pulled out in '73. Source E, F, J and L show how TV could contribute to an anti-war feeling, a factor for America loosing the war. The response of the public had America rethink what they were doing. Sources D, G, H and K would have never appear on US TV. Some of these sources affected troops in Vietnam, but were never reported by the press. Though these sources show evidence of the media worldwide being against the war. Stephen Hardy ...read more.