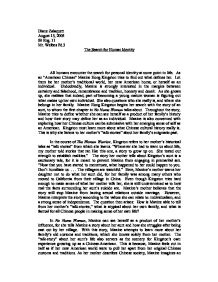 Diane Zalaquett August 15, 2005 IB Eng. 11 Mr. Welbes Pd.3 The Search for Human Identity All humans encounter the search for personal identity at some point in life. As an "American Chinese" Maxine Hong Kingston tries to find out what defines her. Let them be her mother's traditional world, her new American home, or herself as an individual. Undoubtedly, Maxine is strongly interested in the margins between certainty and falsehood, remembrance and tradition, honesty and deceit. As she grows up, she realizes that indeed, part of becoming a young mature woman is figuring out what makes up her own individual. She also questions who she really is, and where she belongs in her family. Maxine Hong Kingston begins her search with the story of an aunt, to whom the first chapter in No Name Woman talks about. Throughout the story, Maxine tries to define whether she can see herself as a product of her family's history and how their story may define her as an individual. Maxine is also concerned with exploring how her Chinese culture can be submissive with her emerging sense of self as an American. Kingston must learn more about what Chinese cultural history really is. ...read more.

She writes about her aunt worrying about the new baby and where it would belong. Maxine does not want her family to be so harsh on her aunt. She also refers to women and how they are considered useless to society. This is another example of how Maxine is her own individual, not necessarily defined by her family or their cultural traditions, for she is still in the process of understanding them and their customs. Maxine is originally Chinese although she feels like she cannot identify who she is based on her family's traditions and cultural history. She grew up and lived in a Chinese community that followed such traditions, yet she cannot deal with women seen as wives or slaves. It is clear that there are several different viewpoints on Chinese culture, for Maxine, unlike her mother agrees and supports her aunt's final destiny. Along the story, the narrator attempts to understand the traditional view of women in society. On the other hand, the narrative about Maxine's aunt helps the reader understand how Maxine's dissatisfaction towards her family's traditional view creates little or no empathy for the traditional view of women in Chinese culture. ...read more.

In order to understand her relatives, and finally understand herself, Maxine Hong Kingston describes her family's cultural traditions using tales that point out the differences between her mother's Chinese culture and her American culture. Kingston wants to understand the culture she is part of and yet one that she has never known. To conclude, even though Maxine sees herself as her own individual, she remains confused as to some aspects in relation to the identity she tries to uncover. When Maxine's aunt goes against the standards of acceptable behavior in her community, "the villagers punished her for acting as if she could have a private life, secret and apart from them." This is when Kingston realizes that she has her own private life, and that no one but Maxine may define who she really is. Finally, Kingston questions her family's traditional views to find out whether they fit her life principles and her own views as an individual. This serves as an example to prove how Maxine is her own individual, and how her family's history is nothing near defining her own identity as a person. Maxine has a family and feels like part of it; yet she knows that the standards of being part of her Chinese family are totally different to what she views as her own standards of life, which she has decided to live by. ...read more.