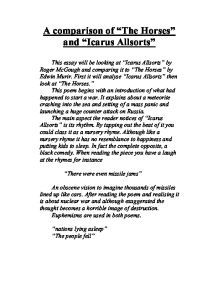 A comparison of "The Horses" and "Icarus Allsorts" This essay will be looking at "Icarus Allsorts" by Roger McGough and comparing it to "The Horses" by Edwin Murir. First it will analyse "Icarus Allsorts" then look at "The Horses." This poem begins with an introduction of what had happened to start a war. It explains about a meteorite crashing into the sea and setting of a mass panic and launching a huge counter attack on Russia. The main aspect the reader notices of "Icarus Allsorts" is its rhythm. By tapping out the beat of it you could class it as a nursery rhyme. Although like a nursery rhyme it has no resemblance to happiness and putting kids to sleep. In fact the complete opposite, a black comedy. When reading the piece you have a laugh at the rhymes for instance "There were even missile jams" An obscene vision to imagine thousands of missiles lined up like cars. ...read more.

Cleverly he makes the reader ask him/her self but would that bring all those people back. Finishing on a glum, solemn and depressing note. Although based on the same themes, of nuclear war, as the above poem that is about the only similarity to it that "The Horses" has. The first thing that is noticeable is the how it begins. It starts off not by given us an introduction of how the event happened or how the Scottish islanders survived it in fact it is set a year after it happened. The poem uses no humour and in comparison with "Icarus Allsorts" basically no rhyming or beat. This seems to make it more gloomy and in a strange way quiet as the other poet used a more lively and up beat approach. Still dealing with the theme of wiping out nearly all human civilisation the poet uses it to talk about the use of machinery and how these survivors completely discarded technology "We make our oxen drag our rusty ploughs" Going back to almost Biblical times this is the best way to farm without the use of technology. ...read more.

There entrance being very dramatic as well. They rush starting form a distant tapping to a roar of thunder. The most dramatic thing is the surprise of it. A bleak world of nothingness then suddenly a mass surge of horses appear from nowhere. It is very strong and effective. Another large aspect to notice is the language of the two poems. Icarus using very clever short and not to descriptive lines and versus. Where as Horses using detailed and strong language in almost every verse and line. Both effective in their own ways. The survivors use the horses for re-building an agricultural need and co-operating with nature as we are animals to. New beginnings is what "The Horses" are all about, optimism of learning from our mistakes. "Icarus Allsorts" ends on a non optimistic view of how the world abolished itself all over a small meteorite. I enjoyed both of the poems but "The Horses" was more for me as the language and general meaning of it was more effective and in some way touching towards my thoughts of war and civilisation. By Dylan Tate ...read more.