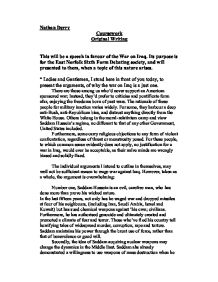 This will be a speech in favour of the War on Iraq.

Nathan Derry Coursework Original Writing This will be a speech in favour of the War on Iraq. Its purpose is for the East Norfolk Sixth Form Debating society, and will presented to them, when a topic of this nature arises. " Ladies and Gentlemen, I stand here in front of you today, to present the arguments, of why the war on Iraq is a just one. There are those among us who'd never support an American sponsored war; Instead, they'd prefer to criticise and pontificate form afar, enjoying the freedoms born of past wars. The rationale of these people for military inaction varies widely. For some, they harbour a deep anti-Bush, anti-Republican bias, and distrust anything directly from the White House. Others belong in the moral-relativism camp and view Saddam Hussein's regime, no different to that of any other Government, United States included. ...read more.

Saddam maintains his power through the brunt use of force, rather than that of benevolence or good will. Secondly, the idea of Saddam acquiring nuclear weapons may change the dynamics in the Middle East. Saddam ahs already demonstrated a willingness to use weapons of mass destruction when he sees it will suit his purpose- a nuclear bomb would just be another tool in his arsenal. I continue, the rebuilding of Iraq, in mine, and many others' opinions, is more than possible. Despite all the protests in recent times over 'nation-building', the fact is, and historical evidence shows, that it works. In fact, Japan, Italy, Germany and many more European countries, owe their current shape to American nation-building. Japan provides the best example. Back in the 1930's, Japan was a strong military force, feared by many, which invaded its' neighbours, committed widespread human rights violations, and ruined the lives and livelihoods of many innocent people. ...read more.

Why? Because morality often serves as an impediment to negotiation, earning scoffs and derisions from international diplomats. However, there is a legitimate issue of morality in this current conflict. I emphasise, Saddam is an evil butcher who has terrorised his people for far too long, and unfortunately, these people are simply incapable of defending themselves, without our assistance. We have it within out power to provide the people of Iraq with freedom, liberty and protection from a brutal government that orders torture, murder and rape against opponents. We can give these people a better tomorrow, more than they ever hoped possible. In conclusion, I say to you that instead of thinking of the deaths and harm that may arise as a result of the war every time it is mentioned, think and look on the positive side; Not only will the evil dictator, Saddam, be removed from his wrongful position, but people can live an easier life without the fear of death just around the corner. Thank you for listening" Nathan Derry ...read more.