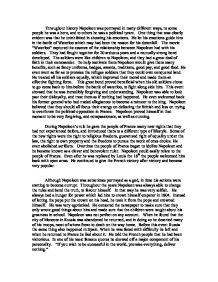 Throughout history Napoleon was portrayed in many different ways, to some people he was a hero, and to others he was a political tyrant.

Throughout history Napoleon was portrayed in many different ways, to some people he was a hero, and to others he was a political tyrant. One thing that was clearly evident was that he uninhibited in showing his emotions. He let his emotions guide him in the battle of Waterloo which may had been the reason for his downfall. The movie "Waterloo" captured the essence of the relationship between Napoleon had with his soldiers. They had fought together for 20 arduous years and a mutually strong bond developed. The soldiers were like children to Napoleon, and they had a great deal of faith in their commander. To help motivate them Napoleon would give them many benefits, such as fancy uniforms, badges, awards, traditions, good pay, and good food. He even went as far as to promise the refugee soldiers that they could own conquered land. He treated all his soldiers equally, which improved their moral and made them an effective fighting force. ...read more.

He even abolished serfdom. Overtime the people of France began to idolize Napoleon and he became known as a clever and benevolent ruler. Napoleon could easily relate to the people of France. Even after he was replaced by Louis the 18th the people welcomed him back with open arms. He continued to give the French victory after victory and became very popular. Although Napoleon was sometimes portrayed as a god, in time his actions were starting to become currupt. Throughout the years Napoleon was always able to change the rules and bend the truth, to favour himself. In that way he was very selfish. He always had a hunger for power which led him to crown himself emperor in 1804. Instead of letting the pope put the crown on his head, he took it from the pope and crowned himself. He was very egotistical. ...read more.

He also made it clear that he wanted his son to have a good quality of life. In the movie he said "I would rather have my son dead than have him raised as a captive Austrian Prince." Throughout the movie they were able to reveal his caring side when he talked about his son. It showed that, although Napoleon was a clever strategist he was also a caring parent, who worried about the welfare of his son. Overall I have come to the conclusion that Napoleon was very similar to us. We're not perfect all the time. Even though his intentions weren't always of the purest, he did a lot of good for France and he influenced the whole world in general. To this day places like Quebec still have laws that were in the Napoleonic code. There are many qualities that made up Napoleon; he was smart, kind, caring, benevolent, egotistical, compassionate, forgiving, selfish, but most of all he was a real person. ...read more.