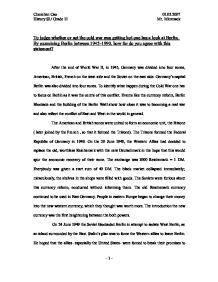 To judge whether or not the cold war was getting hot one has a look at Berlin. By examining Berlin between 1945-1990, how far do you agree with this statement?

To judge whether or not the cold war was getting hot one has a look at Berlin. By examining Berlin between 1945-1990, how far do you agree with this statement? After the end of World War II, in 1945, Germany was divided into four zones, American, British, French on the west side and the Soviet on the east side. Germany's capital Berlin was also divided into four zones. To identify what happen during the Cold War one has to focus on Berlin as it was the centre of this conflict. Events like the currency reform, Berlin Blockade and the building of the Berlin Wall show how close it was to becoming a real war and also reflect the conflict of East and West in the world in general. The American and British zones were united to form an economic unit, the Bizone ( later joined by the French , so that it formed the Trizone). The Trizone formed the Federal Republic of Germany in 1949. On the 20 June 1948, the Western Allies had decided to replace the old, worthless Reichsmark with the new Deutschmark in the hope that this would spur the economic recovery of their zone. The exchange was 1000 Reichsmark = 1 DM. ...read more.

During the blockade a war between the USSR and the USA seemed a real possibility. At the height of the crises, the western power formed NATO , a 12-nation alliance , aimed to protect its members against the Soviet Union and its allies. The Soviets saw that the Airlift was succeeding and everything turned sourer for them. On 11 May 1949, at midnight the Soviets lifted its blockade. However, the airlift did not end until September 30, as the western nations wanted to build up sufficient amounts of supplies in West Berlin in case the Soviets blocked again. The Berlin Blockade was a result of the two different aims for what the USA and USSR wanted to do to Germany. Stalin wanted to destroy Germany, and the USSR had been stripping east Germany of its wealth and machinery. On the other side, Britain and America wanted to rebuild Germany's industry to become a wealthy trading partner. The difference between the Western and Soviet policy were such that conflict was bound to break out there sooner or later. It also represented the first heightening of the Cold War tensions. This event reflected the situation outside Berlin, for example the deteriorating relationship of the Soviet Union and the West. ...read more.

In the fall of that year , the East German regime was o the verge of collapse, and on November 9, private citizens began to demolish whole sections of the Wall without interference from the government officials. On October 3, 1990 East Germany reunited with West Germany as on nation, the Federal Republic of Germany. With the fall of the Berlin Wall the relationship between Russia and America in Berlin as well as in the world became less tense. This shows how Berlin reflect or represent the situation in the world. To judge whether or not the Cold War was getting hot one has to look at Berlin, the focal point of the Cold War, as was shown in the events between 1945-1990. This was mirrored in the currency reform, Berlin Blockade and Berlin Wall, which were caused by the international affairs between America and Russia.. The difference between the Western and Soviet policy were such that conflict was bound to break out there sooner or later. The aims of both counties were too different to together. Every time if there were tensions or disagreements between the two powers something happened in Berlin, as the only place where they were face to face. Words 1317 Chenchen Cao 01.05.2007 History SL/ Grade 11 Mr. Mimmack - 1 - ...read more.