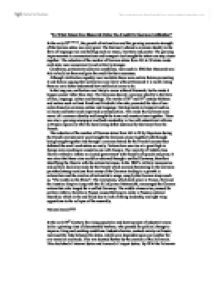 &quot;To What Extent Can Bismarck Claim The Credit For German Unification&quot;.

"To What Extent Can Bismarck Claim The Credit For German Unification" In the early 19th Century, the growth of nationalism and the growing economic strength of the German states was very great. The German's shared a common identity in the form of language race and heritage such as music, literature and poetry. The growing improvements in communications and transport also brought the states one step closer together. The reduction of the number of German states from 365 to 39 states made each state more economically and militarily stronger. Conditions, particularly economic conditions, were such in 1862 that Bismarck was able to build on them and gain the credit for their successes. Although Unification arguably was inevitable there were certain factors preventing it and factors arguing that unification was likely without Bismarck it is worth listing these so as to better understand how unification came to be. In the long run, unification was likely to occur without Bismarck, but he made it happen sooner rather than later. The Germans shared a common identity in the form of race, language, culture and heritage. The works of 18th and 19th century thinkers and writers such as Ernst Randt and Friedrich Jahn who promoted the idea of one nation based on common culture and language. Developments in transport such as railways and better roads improved communication. This made the Germans more aware of a common identity and brought the town and country closer together. There was also a growing newspaper and book readership in line with educational reforms in Prussia especially after the humiliating defeat sustained by Germany from the French. ...read more.

Ultimatums were sent Hanover, Saxony and Hesse demanding that they side with Prussia. When the refused, Prussian troops invaded. The Austro-Prussian war had begun. It appeared that Bismarck used the Schleswig-Holstein crisis to draw the Austrians into a trap, but it is undoubted that he very quickly set his sights on Austria and very quickly set his sights on ways to isolate her from the other European countries. As soon as the war was won for Prussia, Bismarck started working for peace. He had achieved his war aim of pushing Austria out of Germany. He also thought of Austria as a possible ally in the future and was not looking for her as a long-term enemy. Bismarck therefore against the wishes of the king and Prussian generals insisted that Austria should not be badly treated. "We had to avoid wounding Austria too severely" The war ended Austrian domination of the German states. A new federal state called North German Confederation was set up under Prussian domination. The 21 member states, each of which kept it's own head of state, had control of it's own internal affairs. Prussia and Bismarck dominated the north German confederation in particular. He was such a national hero that no one would dare to challenge his position. Prussia took no land from Austria but received land from the German states that had supported Austria. Bismarck's success ensured him liberal support despite his illegal raising of taxes. The French felt threatened by the Prussian's and so to safeguard French interests the French ambassador was sent to Prussia to suggest that France should be allowed some land perhaps on the Rhine to compensate for the large expansions made by Prussia in line with the promises made by Bismarck at Biarritz. ...read more.

The developments made in industry led to the growth of a wealthy middle class who resented increased taxation, restrictions on trade through custom duties and it's exclusion from political power making them press for political reform. The growth of the population, industrialisation and urbanisation created a large, discontented urban working class. The appalling working and living conditions led to social unrest and demands for political reform. Bismarck however also wanted to see Prussia as the leading state of a unified Germany, which was how many Germans saw it anyway due to Prussia's influence on the Zollverein and because Prussia had ended the Austrian domination of the German states. " Bismarck's task of unifying Germany was made easier by circumstances. If he played his hand with great skill it was a good one in the first place". The growth of nationalism and economic unification in the German sates from the early 19th Century, made unification inevitable. Bismarck hastened the process and helped unification occur sooner rather than later. Many people argued that Bismarck did not make Germany but Germany made Bismarck and that he was able to build upon economic conditions and claim the credit. Claim the credit for a unification that given time would have occurred naturally and that "coal and iron" not "blood and iron" was the real Prussian power base. Bismarck used massive skill and ruthlessness to unify Germany but he did exaggerate his own role in the unification of Germany for not only was he not solely responsible for the unification of Germany but it was going to happen sooner or later. So in conclusion Bismarck can claim the credit for unification to an extent but he acted as a catalyst to speed up the unification of Germany, which was already happening. ...read more.