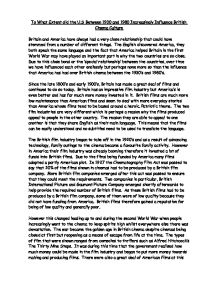 To What Extent did the U.S Between 1930 and 1980 Increasingly Influence British Cinema Culture?

To What Extent did the U.S Between 1930 and 1980 Increasingly Influence British Cinema Culture Britain and America have always had a very close relationship that could have stemmed from a number of different things. The English discovered America, they both speak the same language and the fact that America helped Britain in the first World War may have played an important part in why the two countries are so close. Due to this close bond or the 'special relationship' between the countries, over time we have influenced each other endlessly but perhaps none more so than the influence that America has had over British cinema between the 1930's and 1980's. Since the late 1800's and early 1900's, Britain has made a great deal of films and continues to do so today. Britain has an impressive film industry but America's is even better and has far much more money invested in it. British films are much more low maintenance than American films and seem to deal with more everyday stories than America whose films tend to be based around a heroic. ...read more.

The war became the golden age in British cinema despite cinemas being closed at first but reopening as a means of escape from life at the time. The types of film that were shown ranged from comedies to thrillers such as Alfred Hitchcock's The Thirty Nine Steps. It was during this time that the government realised how much money could be made in the film industry and began to put more money towards making and producing films. There were also a great deal of American films at this time but this was to change after the war. Britain put a tax on all American films to which America responding by not allowing their films to be shown in Britain. This gave the British film industries a chance to flourish. However, it did not have enough money or experience to expand. As a consequence of this, the British film industry did not grow but managed only to gain itself a better reputation after producing films such as Great expectations in 1946. ...read more.

America likes British films because of the different sense of humour used in them and the fact that they deal with normal people and everyday life. Both industries are good and appeal to each other for lots of different reasons. Although America had a tremendous influence over the British film industry from the twenties until about the sixties, Britain still managed to develop it's own style which makes the industries very contrasted and has made them more appealing to the American market. It would be true to say that the USA had a big influence over the British film industry and still does today to some extent in that Americans who like British films will go to the cinema to watch them and therefore the industry gets more money to invest in other films. Of course the USA is much larger than Britain therefore more people in America are going to see British films than in Britain itself meaning that the film yields more money. Today American funding still exists but mainly due to how successful the British film is in America whereas before the funding was direct and therefore the influence of America was stronger. ...read more.