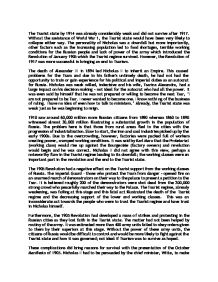 To what extent did WW1 cause the collapse of Tsarism?

The Tsarist state by 1914 was already considerably weak and did not survive after 1917. Without the assistance of World War 1, the Tsarist state would have been very likely to collapse either way. The personality of Nicholas was a downfall but more importantly, other factors such as the increasing population led to food shortages, terrible working conditions for the Russian people and lack of power of the army which introduced the Revolution of January 1905 which the Tsarist regime survived. However, the Revolution of 1917 was more successful in bringing an end to Tsarism. The death of Alexander III in 1894 led Nicholas II to inherit an Empire. This caused problems for the Tsars and due to his father's untimely death, he had not had the opportunity to train or gain experience for his political and imperial duties as an autocrat for Russia. Nicholas was weak willed, indecisive and his wife, Tsarina Alexandra, had a large impact on his decision making - not ideal for the autocrat who had all the power. It was even said by himself that he was not prepared or willing to become the next Tsar, 'I am not prepared to be Tsar. I never wanted to become one. ...read more.

An important point to remember is that the army consisted mainly of peasants who had very little rights, therefore the army officers also had very little rights but also had weapons. Civil rights were granted to the citizens do there was more freedom, as was freedom of the press. The General Strike as a result of the 1905 revolution was called off. Things were looking up for the Tsar and his autocracy as the citizens of Russia were achieving more freedom and rights, but there were other problems illustrating strain. The population in Russia persisted to increase which led to too little space for too many people. This was an issue for the Tsarist regime as the army and state police could not keep up with or control the people of Russia. This increase led to shortage of land for farmers and peasants in rural areas. Lack of land produced less food which meant food shortages; certainly an issue as it played a significant part over the years into the Revolution of 1917 which was the final blow to the collapse of the Tsarist regime. ...read more.

Instead of higher wages, workers were losing their jobs which brought more strikes and demonstrations in the cities. When commanded to calm down, the workers refused and even the soldiers began joining in on the demonstrations as a means of ending the war. When Nicholas II heard of disorders in the streets, he called for action to be taken and the army opened fire yet again on the strikers. This did not work as the demonstrations did not calm down, nor were the demonstrators willing to back down. The Tsar was losing not only the war against Germany, but also the war against his own people. By now, it was to be expected that Tsarism was to fall. There was no hope for the Tsar and his governing to survive from the beginning. Several factors contributed to his downfall, not only World War 1. The combination of these factors; the discontent and mutiny of the army, discontent of the working classes and peasants, his own personality and dependency on his wife, increasing population and food shortages, would have indefinitely brought the Tsarist regime crashing down without the war. It was only a matter of time before this would happen, and it was surprising that the autocracy had survived for so long. ...read more.