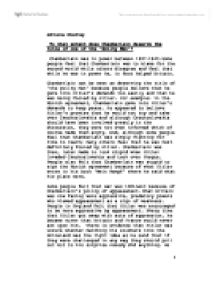 To what extent does Chamberlain deserve the title of one of the Guilty Men?

Adrienne Stockley To what extent does Chamberlain deserve the title of one of the 'Guilty Men'? Chamberlain was in power between 1937-1940.Some people feel that Chamberlain was to blame for the second world while others disagree and feel that while he was in power he, in fact helped Britain. Chamberlain can be seen as deserving the title of 'the guilty men' because people believe that he gave into Hitler's demands too easily and that he was being fooled by Hitler. For example: in the Munich agreement, Chamberlain gave into Hitler's demands to keep peace. He appeared to believe Hitler's promise that he would not try and take over Czechoslovakia and although Czechoslovakia should have been involved greatly in the discussion, they were not even informed which of course made them angry. And, although some people feel that Chamberlain was simply fighting for time to rearm; many others feel that he was most definitely fooled by Hitler. ...read more.

The Russians did not trust Chamberlain. The USSR was scared of appeasement and so they were not happy with Chamberlain's actions at the time. Stalin believed that Britain would not help Russia if Hitler invaded, because Britain did not stand up to Hitler when he invaded Czechoslovakia even though he made an agreement with Hitler that he would not do it. People feel that Chamberlain should have tried to stop him because of the fact that he agreed with Hitler when he signed the Munich agreement. All this persuaded Stalin to make an agreement with Hitler and the Nazi-Soviet pact was signed. This later allowed Hitler to invade Poland. Poland was the final straw for everyone in Britain and they felt that Chamberlain should do something about it except for appeasement as this was not working. There was, on the other hand a lot of things which Chamberlain did that were found to be positive to many people. ...read more.

With people not wanting war with Germany of the Treaty of Versailles, appeasement seemed the best thing for Britain. But after Hitler breaking the Munich agreement British public opinion started to change and it was united in favour of war to stop the Germans. The British empires also were starting to feel that war to stop Hitler was a good idea and this was vital to Britain. In 1939, Chamberlain stopped appeasement for good after the invading of Poland by Germany. This was of course the last straw for Britain and they were happy with Chamberlain's decision. I feel that overall evidence suggests that Chamberlain did not deserve the title of one of the 'guilty men'. He had Britain's best interests at heart. He may have made some mistakes but they were not selfish mistakes and they were made as he maybe didn't understand, at the time why what he did may have been a mistake. The things that he did do right pleased the majority of people in British and in the British empires. ?? ?? ?? ?? 1 ...read more.