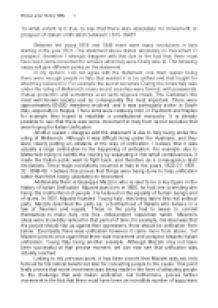 To what extent is it true to say that there was absolutely no movement or prospect of Italian Unification between 1815-1848?

﻿Emma Lerner History 12ML 1 To what extent is it true to say that there was absolutely no movement or prospect of Italian Unification between 1815-1848? Between the years 1818 and 1848 there were many revolutions in Italy starting in the year 1821. The statement above states ?absolutely no movement or prospect,? therefore I strongly disagree with this due to the fact that there must have been some movement to achieve what Italy were finally able to. The following essay will give different points on the statement. In my opinion, I do not agree with the statement, one main reason being there were enough people in Italy that wanted it to be unified and that fought for what they believed in. For example the secret societies. During the times Italy was under the ruling of Metternich, many secret societies were formed, with passwords, mutual protection and sometimes even semi-religious rituals. The Carbonari, the most well known society and so consequently the most important. There were approximately 60,000 members involved, and it was particularly active in South Italy, especially in Naples. ...read more.

Yet Mazzini proves once again that there was movement and prospect towards Italian unification, Young Italy being another example. Although Mazzini may not have been successful at that precise moment, we can now see that unification was actually reached. Linking to my previous point, it has been proven that Mazzini was not only famous for his radical beliefs but also for converting people to the cause. This point firstly proves that some movement was being made in the form of attracting people to the challenge that was Italian unification, but furthermore, proves further movement in the fact that there must have been an incredible number of supporters that were in favour of unification, and therefore plans must have been made to try and succeed. Finally, by seeing that Italian Unification was attained eventually, we can ultimately say that there must have been enough movement and enough prospect for the aim to be successful. For these reasons, i disagree with the statement ?To what extent is it true to say that there was absolutely no movement or prospect of Italian Unification between 1815-1848?? On the other hand, there are many events from this period of time that may agree with the statement previously specified. ...read more.

It is understood that without a back bone, a body would be unable to stand, hence the fact that without the Apennine Mountains it would be incredibly challenging for the population of Italy to achieve the prospect of unification. Overall, one can see that there are many justifications for both sides of this argument. Although from this essay it seems the statement is in fact true, I strongly disagree. Understanding that there may be proof to support the statement, at the end of the day Italian Unification was achieved, and therefore it is impossible to say that there was ?absolutely no movement? because the aim was fulfilled and therefore some movement must have taken place. In conclusion, I disagree with the statement ?to what extent is it true to say that there was absolutely no movement or prospect of Italian Unification between 1815-1848? because this declaration clearly states that there was ?absolutely no movement? towards Italian Unification between those years, yet unification was completed, thus whether there was a lot of movement, or in some case a little, there was undoubtedly more than none, and for this reason I forcefully disagree with the statement. ...read more.