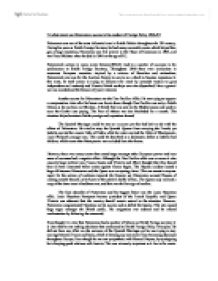 To what extent was Palmerston a success in his conduct of Foreign Policy 1846-51?

To what extent was Palmerston a success in his conduct of Foreign Policy 1846-51? Palmerston was one of the most influential men in British Politics throughout the 19th century. During his years as British Foreign Secretary he had many successful events, which helped him gain a huge reputation. Palmerston was first present in the House of Commons in 1807, and was Prime Minister when he died in 1864 at the age of 81. Palmerston's actions in many events between1846-51 lead to a number of successes in his performance as British Foreign Secretary. Throughout 1848 there were revolutions in numerous European countries, inspired by a mixture of liberalism and nationalism. Palmerston's aim was for the Austrian Empire to survive as a check to Russian expansion. In this event, he took action in trying to influence the result by persuade Austria to grant independence to Lombardy and Venetia. British warships were also dispatched. Here, a general war was avoided and the balance of power restored. Another success for Palmerston was the Don Pacifico Affair. ...read more.

The Haynau incident caused a huge rift between Palmerston and the Queen over an apology letter. This was meant to express regret for the actions of workmen towards the General, yet Palmerston accused Haynau of creating trouble himself, as he knew of the public's dislike of him. The Queen only received a copy of the letter once it had been sent, and this was the first sign of conflict. The final downfall of Palmerston and his biggest failure was the Louis Napoleon affair. Louis Napoleon Bonaparte became president of the French Republic and Queen Victoria was adamant that the country should remain neutral to the situation. However, Palmerston congratulated Napoleon on his success and so defied the Queen. This also caused huge anger amongst the British public. His resignation was ordered and he refused confrontation by following the command. Even though it is clear that Palmerston had a number of failures as British Foreign secretary it is clear that he was making decisions that conformed to British Foreign Policy Principles. ...read more.

These events were some of many that helped Palmerston become extremely popular with the British public. It is clear that Palmerston was tremendously popular with the British public throughout the duration of his term as Foreign Secretary. He was involved in a number of important events that helped Britain obtain the most powerful position throughout Europe. However, things began to deteriorate once Palmerston started to ignore commands and advice from the Queen. He was needed as a good negotiator and yet it became apparent towards his downfall that he was intent on going his own way on what he thought reflected British Foreign policy principles. Therefore I feel that it was the correct decision for him to be dismissed from power in 1851. He had defied Queen Victoria on too many occasions and his actions were supposed to stand for those of the monarchy, government and the public. Overall, I believe that his conduct of British Foreign Policy was not as successful as the period of 1830-41. He still had many achievements in a number of situations and showed great political skills and power, yet he was responsible for his own downfall in 1851. ...read more.