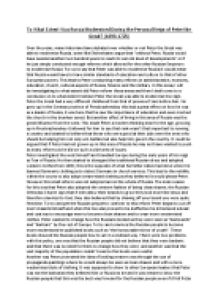 To What Extent Was Russia Modernised During the Personal Reign of Peter the Great? (1693-1725)

﻿To What Extent Was Russia Modernised During the Personal Reign of Peter the Great? (1693-1725) Over the years, many historians have debated over whether or not Peter the Great was able to modernise Russia, some like Shcherbatov argue that ?without Peter, Russia would have needed another two hundred years to reach its current level of developments? or if he just simply conducted enough reforms which allowed for the other Russian Emperors to modernise Russia. For us to say that Pater was able to modernise Russia it would mean that Russia would have to have similar standards of education and culture to that of other European powers. This lead to Peter conducting many reforms in administration, economy, education, church, cultural aspects of Russia, finance and the military. In this essay I will be investigating to what extent did Peter reform these areas and then I shall come to a conclusion on to what extent I believe Peter the Great was able to modernise his reign. Peter the Great had a very different childhood from that of previous Tsars before him. He grew up in the German province of Preobrazhenskoy this had a great effect on how he was as a leader of Russia, it was here that he saw the importance of education and even mocked the church in the drunken synod. ...read more.

This quote shows us how poor education was prior to Peters reign, Hughes also says that not only was the worst education in the west but it was also worse than some of its eastern countries. Peter attempted to reform education on several occasions. His first attempt was in 1701, when Peter established the Moscow School of Mathematical Science and Navigation. With the help with foreigners this school was created. Many Russians including those form old noble families were highly against this as traditionally the Russians did not like the help of foreigners. Another reform came in 1715; Peter then then moved the Mathematical Science and Navigation to Moscow where the name was then changed to the ?Naval Academy. The people who then came out of these schools went on to become sailors engineers, architects some graduates went on to teach in the provinces. In 1721; these academy?s then expanded and diocese schools where then set up and 42 schools in 6 years. These schools were supposed to encourage the normal people of Russia to get an education. However there were problems with this, most of the academies were mostly filled with children from Russian noble families and even then the families were not that keen on sending their children to these academies, a problem facing the diocese schools was that the peasants were not prepared to send their ...read more.

The patriarch who was the head of the Orthodox church had a great amount of influence to which, Peter felt some people, especially those who did not like his westernised ideas would follow the views of the traditional patriarch and ignore Peters wants and aims. The patriarch was also incredibly wealthy as he looked after nine thousand peasants houses which were built on church land. Peter felts angry that many people joined monasteries as to avoid there compulsory military service. At the end of 1701 Peter put forward the reform that monks could only live on allowance of 10 roubles per year this came about not only because of many people using this a loop hole as too avoid joining the army but also because of the drunken state of many of these monks. In 1709 Peter decreed that all bishops had a limited income which meant they could only look after their households and no more. This meant Peter now had full control of the church. Peters also controlled through ?The Sub junction if the Church to the State? . In 1700mthe old patriarch died to further establish his power Peter appointed Stefan Yavorski as a ?acting? patriarch, this allowed Peter to reduce the control of the patriarch as anything which is acting has considerable less power than those who actually were patriarch. To further put reforms further 1716 Peter said that all new bishops must take an oath to say that they promised not to interefer. ...read more.