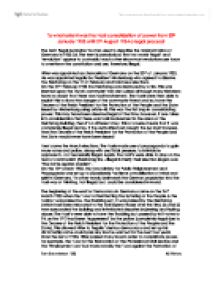 To what extent was the Nazi consolidation of power from 30th January 1933 until 2nd August 1934 a legal process?

To what extent was the Nazi consolidation of power from 30th January 1933 until 2nd August 1934 a legal process? The term 'legal revolution' is often used to describe the transformation of Germany in 1933-34. The term is paradoxical. The two words 'legal' and 'revolution' appear to contradict each other since most revolutions use force to overthrow the constitution and are, therefore, illegal. Hitler was appointed as chancellor of Germany on the 30th of January 1933. He was appointed legally by President Hindenburg who agreed to dissolve the Reichstag on the 1st of February and hold new elections. On the 27th February 1933 the Reichstag was destroyed by a fire. This was blamed upon the Dutch communist Van der Lubbe; although many historians have no doubt that there was Nazi involvement. The Nazis were then able to exploit this to show the danger of the communist threat and so, have the Decree of the Reich President for the Protection of the People and the State issued by Hindenburg using article 48. ...read more.

In other words, brainwash the German population into the Nazi way of thinking. Not illegal, but, could be considered immoral. The beginning of the end for Democracy in Germany came on the 24th March 1933 when the 'Law for Terminating the Suffering of the People & the Nation' was passed i.e. the Enabling Act. It was passed by the Reichstag (which had been relocated to the Kroll Opera House after the fire). SA and SS men surrounded the building and intimidated deputies by jeering and hurling abuse. The Nazi's were able to have the Enabling Act passed by 441 votes to 94, as the KPD had been 'suppressed' by the police (completely legal due to the Decree of the Reich President for the Protection of the People and the State). This allowed Hitler to 'legally' destroy democracy and set up his dictatorship as he could pass any law he wanted for the next four years! ...read more.

Finally, on the 1st of August 1934, the Law concerning the Head of State of the German Reich merged the offices of the President and chancellor in the new position of Fuhrer and Reich Chancellor. On the 2nd of August 1934, Hindenburg dies and the Army must take a oath of personal loyalty to Hitler. In conclusion, the Nazi's did not simply rely on force to overthrow the constitution as the word 'revolution' would suggest. They attempted to give the impression that the dictatorship they built rested on a legal foundation. The steps they took did not necessarily break the letter of the ever changing constitution, though they did break its spirit and, cumulatively, changed it beyond recognition. Hitler's consolidation of power was brought about by a combination of legal measures, terror, manipulation and willing collaboration. Since this was the case and sense the threat of violence was ever present, it could be argued that it would be more accurate to take of a 'pseudo-legal' revolution. ?? ?? ?? ?? Tom Saunderson 13Q AS History ...read more.