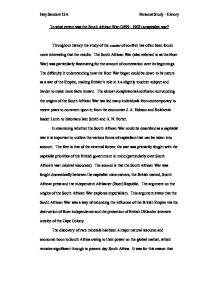 Local capital was obsessed with the global market at the expense of the conflict that they were encouraging. The Rand Lords chose their own financial gains over the interest of the majority; a truly capitalist war. The end of the 19th century was a veritable heyday for the British Empire. Britain held tremendous economic, political and social power over the world and could easily be described by a modern day commentator as the single greatest 'superpower' on Earth. The British were particularly dominant in Africa, where it was said that Britain wished to control all of Africa 'from Cape Town to Cairo'. It is also interesting to note that the Anglo-Boer War was unique out of the Empire wars to date in that it was primarily fought against white, Afrikaner 'natives'. Within South Africa, British Uitlanders were greatly outnumbered by the Afrikaners, which made even a peaceful situation difficult to administrate. For some time, war was held in the balance between two men; the pro-war, anti-Afrikaner, High Commissioner Milner and his opponent, Sir William Butler the Commander-in-Chief of the British armed forces in South Africa. Whilst Milner openly supported the British Uitlanders, professing to empathise with their plight, Butler regarded them as troublemakers who were purposefully stirring up trouble with the Kruger government (a prime example of this sentiment can be seen in the Jameson raid). The stalemate between Milner and Butler needed to be broken before any progress could be made. One of the pair would have to be removed. The decision made by the British government would reflect its vision for the future of South Africa. ...read more.

equally prized natural resource, oil, or simply for imperialism, to extend Britain's influence across nations, long after the dismantling of the empire. Equally then ordinary people were outraged by abuses of human rights by occupying soldiers, instead of Guantanamo Bay, the Boer War featured some of the earliest 'concentration camps' where a substantial number of innocent Afrikaner women, children and black Africans died. The Iraq War, much like the Boer War began as a clash of easily recognisable personalities instead of Bush and Blair facing Saddam Hussein, it was Milner and Chamberlain facing Paul Kruger. In spite of that, one big difference is notable; the accepted normality of society. The sort of people who would take keen interest in the South African war would more likely have been erudite, gentleman diplomats holding principled views compared to the present day when it is safe to say that we live in a capitalist society where people who get most involved in wars are those who stand to profit from the carnage. Over the years, the nature of capitalism has not changed a great deal. During the South African War, the capitalists' primary concern was themselves. The British focused on the Transvaal gold and how it would profit their mighty Empire. The Rand Lords were interested in keeping hold of their mines and publications in order to maintain their power over the domestic South African market. It is finally safe to conclude that a country would not go to war unless it stood to profit in some way either through partnership with another country, global standing or, in this case, capital gain. ?? ?? ?? ?? Izzy Sanders 13A Personal Study - History ...read more.