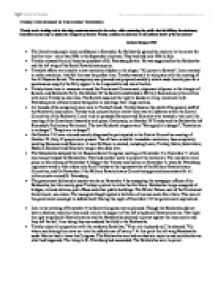 Trotsky's involvement in The October

Trotsky's involvement in The October Revolution 'Trotsky took a leading role in directing countermeasures for the soviet, while reassuring the public that his Military Revolutionary Committee meant only to defend the Congress of Soviets. Trotsky continued to function as the military leader of the Revolution' Gerhard Rempel 1998 * The liberals and people loose confidence in Kerensky. So Bolsheviks gained the majority in the soviet for the first time - more than 50% in the September elections. They had had only 10% in July. * Trotsky released from jail become president of St. Petersburg Soviet. He was supported by the Bolsheviks and the left wing of the Social Revolutionary party. * Trotsky's efforts are aimed at a new revolution hidden in the slogan. ...read more.

Trotsky took concrete action whislt there was still debates within the Central Committee of the Bolshevik. Lenin tried to persuade Kamenev and Zenoviev who wanted to wait until the meeting of the Constituent Assembly took place. Ominously, on October 20 Trotsky and the Bolsheviks left Kerensky's Preliminary Parliament. The new Bolshevik slogans were "Petrograd is in danger", "Revolution is in danger", "People are in danger"! * On October 21 Lenin returned secretly disguised he participated in the Central Committee meeting of October 23. Only 12 people were present. Ten of them voted for immediate revolution, thus completely isolating Kamenev and Zenoviev. A new Politburo is elected, including Lenin, Trotsky, Stalin, Sokolnikov, Bubnov, Kamenev and Zenoviev resign a few days later. * The Mensheviks delayed the All Russian Soviet Congress meeting on November 2 to November 7. ...read more.

This was all the government could get to defend itself. During the night of November 7-8 the government capitulated. * Late in the evening of November 6 the Soviet Congress met as planned. Though the Bolsheviks did not have a absolute majority, they could rely on the support of the left wing Social Revolutionaries. That night the right wing Social Revolutionaries and the Mensheviks declared a protest against the insurrection and they left the hall. In so doing they surrendered the field to the Bolsheviks. * Trotsky reject all cooperation with the moderate Socialists; "Your role is played out," he shouted. "Go where you belong from now on--into the rubbish-can of history." At this point the left wing Mensheviks under Martov had to leave the Congress. The Bolsheviks now had an absolute majority and could authorize what had happened. The rising in St. Petersburg had succeeded. The Bolsheviks were in power. ...read more.