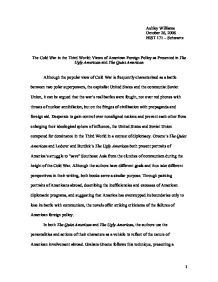 Ashley Williams October 26, 2006 HIST 171 - Schwartz The Cold War in the Third World: Views of American Foreign Policy as Presented in The Ugly American and The Quiet American Although the popular view of Cold War is frequently characterized as a battle between two polar superpowers, the capitalist United States and the communist Soviet Union, it can be argued that the war's real battles were fought, not over red phones with threats of nuclear annihilation, but on the fringes of civilization with propaganda and foreign aid. Desperate to gain control over nonaligned nations and prevent each other from enlarging their ideological sphere of influence, the United States and Soviet Union competed for dominance in the Third World in a contest of diplomacy. Greene's The Quiet American and Lederer and Burdick's The Ugly American both present portraits of America's struggle to "save" Southeast Asia from the clutches of communism during the height of the Cold War. Although the authors have different goals and thus take different perspectives in their writing, both books serve a similar purpose. Through painting portraits of Americans abroad, describing the inefficiencies and excesses of American diplomatic programs, and suggesting that America has overstepped its boundaries only to lose its battle with communism, the novels offer striking criticisms of the failures of American foreign policy. In both The Quiet American and The Ugly American, the authors use the personalities and actions of their characters as a vehicle to reflect of the nature of American involvement abroad. ...read more.

Pyle's ultimate death, a result of his indiscretion and blundersome meddling, serves as Greene's warning to American leaders to rethink their foreign policy or risk suffering the same fate. In contrast with Greene's technique of presenting two characters within a single plot line, Lederer and Burdick frame The Ugly American as a series of interconnected fictional anecdotes designed to reflect America's involvement in international affairs in a range of scenarios. As such, it provides a subtler and less inflammatory critique of American foreign policy. With its reflections of Americans abroad as both helpful missionary types and egotistical interlopers, the novel caught the attention of President Eisenhower and encouraged his administration to review America's diplomatic and political strategy in Asia. The Ugly American, unlike The Quiet American, which was popularly dismissed as anti-American propaganda, enjoyed runaway success, largely because the Lederer and Burdick skillfully managed to include realistic criticisms and suggestions for change within a framework that praised the American people's goodhearted contributions to fighting the Cold War. The "good" characters of the novel, such as Colvin the well-meaning milkman, the fearless and devoted Father Finian, and Atkins the pragmatic, plain spoken engineer, offer an insight into the mindsets of concerned Americans who were willing to make personal sacrifices for what they believed to be a worthy and admirable cause. Amidst these tales of American goodwill, however, the authors plant the seeds of their critique. ...read more.

Ultimately, The Quiet American and The Ugly American succeed in crystallizing the nature of American intervention in Southeast Asia in terms of its economic, political, and social ramification. As the de facto colonial power in many Third World nations including those described in the two novels, the United States, despite its adamant disavowals of imperialist motivations, found itself embroiled in a situation where it was fighting to prevent the communists from adulterating its ideological satellites while simultaneously working to ensure that these nations would remain friendly to American policy. The establishment of a Third Force, thus, meant far more than simply finding a non-communist power to lead these non-aligned nations - it entailed choosing a government that could be trusted to resist the communist at all costs, a government whose tendencies were clearly and undeniably Western. By assuming the inherent weakness and inferiority of the Third World nations it was trying to aid, America alienated the individuals and groups it should have been considering as candidates to leadership, thus transforming their enmity into support for communism or other forms of anti-Western doctrine. As The Quiet American and The Ugly American suggest, the ultimate problem with Washington's strategy for defending Southeast Asia lies in the plan's lack of forethought and the obvious differences between its stated objectives and the political implications associated with the achievement of those goals. ?? ?? ?? ?? 1 ...read more.