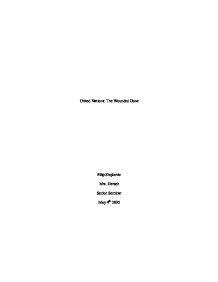 United Nations: The Wounded Dove Filip Stojkovic Mrs. Dersch Senior Seminar May 4th 2005 An organization created to unify the world, to protect us from each other in the ultimate goal of creating world prosperity and unity between one another in the hope of stopping another world war of occurring. This organization is called "The UN's." The idea of a first peace organization was come with up towards the end world war one (1914-1918). This organization was called "The League of Nations," and was initiated after World War one. This organization had many flaws and could not stop the Germany once again from trying to take over Europe. This thus was the start of World War two. World War two (1939-1945) was split up into two groups, the Allies and the Axis. The Axis being primarily the Germans and their close allies, which consisted of the Italians, Japanese and Turks. The other group, called the Allies consisted of the nations of America, Great Britain, France, China and Russia. Towards the end of the war, Europe was left into ruins, its economy was in disasters and people did not have homes to go back to, when the war was over. This lead to some of the allied leaders to meet and talk on what the future should bring. One of these meetings was held between Franklin D. Roosevelt and Winston Churchill (The UN - HLS). Though when this meeting took place, America still was not in the war, but were still helping by aiding the Allies, with supplies. Officially the UN's sprung up, during a secret meeting in August 1941 on board of the worship "Prince of Wales" (The UN - HLS). Though officially, the UN's was introduced to the world by Roosevelt in January 1942 and was signed by twenty six nations (The UN - HLS). So the framers of the UN were the countries of America and Great Britain, but the other Big Allied Nations received the same powers as the Framers themselves. ...read more.

This means these five permanent members have control of what goes on within the UN's for ever. But to make the matter worse these five permanent members have the ability to veto each other, so for a proposal to pass all five nations plus two rotating members must agree on the proposal so that it can be taken into action. This obviously shows a major flaw in the system because each of the permanent members can veto each other as a political game, in a way it's a battle field. The big five can also stop the introduction of a decision by the general assembly if any of them disagree (The UN - HLS). This shows us that unlike the American system of government, the UN's does not have a system of checks and balances. After all a decision made by the world should not be vetoed by five nations. Another problem with the system is that some of the permanent members are not strong nations as they were after World War 2. So in theory it is not fair they should be given that power anymore. There are other nations that give more money and support to the UN's who are not permanent members because of the outcome of World War two. Two of these nations are Germany and Japan. One man from India stated that "the security council has turned out to be a 'club' for some nations and does not represent the larger interests of the global community..." (qtd. in UN Matter). The UN's has had problems in the past as well even though they had some success as I mentioned above. During the cold war period, the UN was completely useless because Russia and the United States were not going to compromise with one another and only wanted to follow their own foreign policy regardless of the UN's wishes (UN and Problems). ...read more.

Another Improvement that needs to be taken is a way of checks and balances as the United States has within their government. This way each council would have equal power and could question each other. Though within these checks and balances there should be a committee that would appoint and monitor the process of their employees making sure they where doing what they needed to be and if there is an excess of employees, some should be sent home. Though not only should they control the amount of employees, they should pay them less and not allow them to take advantage of the organizations huge amount of funding from international countries. Instead of the money wasted on employees that much needed money should be sent to the poor around the world. Besides since the UN today is low on money it should not allow its employees to go to expensive hotels and eat out on the expensive of tax payers. There for the Secretary General should not receive one billion dollars a year but should instead receive a quarter of that amount and if he needs more ask for voluntary funding (UN Necessary). "Though these proposed alterations may not answer all of the UN's problems and inefficiencies but are realistically all that can be done for the time" (Overhaul). But the major problem we are faced with is that none of the major nations are willing on reform because that involves them of losing their power. There for a whole New organization created from scratch would be easier and more efficient in the long run. The UN's is an outdated organization trying to do good for the world, but unable to succeed due to the way the 'Big Four' wrote out the UN charter. It has a reluctance to make decisions and take risks. The UN's needs an "overhaul," but making the change to the UN's is impossible and thus needs to be trashed and recreated following a more democratic form without a security council and without the veto power. Right now all the UN's is doing is making the rich richer. ...read more.