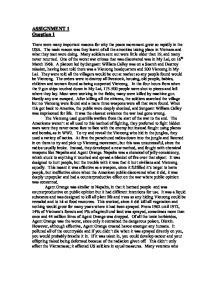 ASSIGNMENT 1 Question 1 There were many important reasons for why the peace movement grew so rapidly in the USA. The main reason was they learnt of all the atrocities taking place in Vietnam and what they men were doing. Many soldiers sent out were little older than 19, and many never returned. One of the worst war crimes that was discovered was in My Lai, on 16th March 1968. A platoon led by Sergeant William Calley was on a Search and Destroy mission, having been told there was a Vietcong headquarters and 200 Vietcong in My Lai. They were told all the villagers would be out at market so any people found would be Vietcong. The orders were to destroy all livestock, housing, old people, babies, children and women found as being suspected Vietcong. In the four hours from when the 9 gun ships touched down in My Lai, 175-500 people were shot to pieces and left where they lay. Most were working in the fields; many were killed by machine gun. Hardly any one escaped. After killing all the citizens, the soldiers searched the village but no Vietcong were found and a mere three weapons were all that were found. When this got back to America, the public were deeply shocked, and Sergeant William Calley was imprisoned for life. It was the clearest evidence the war had gone wrong. The Vietcong used guerrilla warfare from the start of the war to the end. The Americans weren't at all used to this method of fighting, they preferred to fight hidden wars were they never came face to face with the enemy but instead fought using planes and bombs, as in WW2. To try and reveal the Vietcong who hid in the jungles, they used a variety of tactics. At first the parachuted radios down into the jungle and listened in on them to try and pick up Vietcong movement, but this was unsuccessful, since the radios usually broke. ...read more.

Indo-China was made up of 3 countries-Laos, Cambodia, and Vietnam and it was taken over by the French in the early 19th century. During the time when it was ruled by the French, an independent movement started because some in Vietnam wanted independence of the French and attempted to get rid of them using Communism. In 1941 Japan attacked Pearl Harbour, took over Hong Kong, and took control of Laos, Cambodia and Vietnam. This put France in a difficult position because in 1940 France was taken over by Germany and the North and West of France were directly ruled by the Nazis. However, South France operated in a different manner, using a puppet-government of French Collaborators who supported the Nazis. This was run under Marshall Petain and Pierre Laval and was named Vichy France. It was the only French government from 1940 until 1944. However, because the Vichy government supported Germany, and Japan was a German Ally, France couldn't resist Japan when it tried to take over Indo-China, so the French were forced to pull out of its colony. The people of Indo-China felt deserted and greatly resented this move. Instead, they took matters into their own hands and began a resistance movement in Vietnam named the Vietminh. It was led by a Communist, named Ho-Chi Minh, and repelled the Japanese control. They did this by fighting a guerrilla war against them from 1941 until 1945. In 1945 the Japanese left Indo-China, as a combined result of Hiroshima and Nagasaki. They believed if they were going to have this much trouble in Vietnam, it wasn't worth the effort. Once they had left the French returned. The Vietminh, who were led by Ho Chi Minh, turned against them and repelled them instead, in an attempt to drive them out. They believed the French had no right to be in control if they had refused to help with the Japanese, and continued their guerrilla war, only this time against the French. ...read more.

Calley was put on trial after the war and sentenced to life imprisonment but was released after 3 years. My Lai deeply shocked America when the media finally found out and displayed the terrible images and it was the clearest evidence the war had gone wrong. A further tactic used by the Americans was Napalm attacks. Napalm was a chemical with a jelly consistency that stuck to anything it touched and stayed there. It spread a blanket of fire over the object it was stuck to and couldn't be removed, even in water. It was dropped from air and was targeted at people. The problem with it was, although the Vietcong were the target, it also harmed the civilians and the US allies, and helped turn them against the Americans and change sides to support Vietcong, since they did more to help the civilians. As a weapon it was very effective, but when used for propaganda it was the opposite, since it helped turn Americans against the war. The final tactic involved decoy patrols being sent out to look for the enemy in the dense jungle foliage. When the enemy attacked, the patrol group would retreat then from safety, call in air strikes of bombs or delifoliants such as Agent Orange. This was a fairly successful tactic, but didn't always work- the patrol groups could be reluctant to go out on patrol, seeing as one of there group, if not more, would probably be killed. They might all be killed since the Vietcong wouldn't just give in when they started to retreat, or the strike planes could lose the target area easily. These are all some of the main tactics in use by either Americans or Vietcong. Some were successful, some not so successful. Many failed miserably, mostly American tactics. In a way, the Vietcong had a strong advantage, because they concentrated on a main tactic, guerrilla warfare, and all their other tactics were based around this. The Americans tried many different tactics, but didn't really stop to work on one if it failed first time around. 1395 words ...read more.