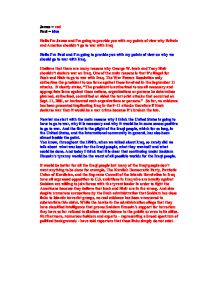 Views on why we should or should not go to war with Iraq.

James = red Paul = blue Hello i'm James and i'm going to provide you with my points of view why Britain and America shouldn't go to war with Iraq Hello I'm Paul and I'm going to provide you with my points of view on why we should go to war with Iraq. I believe that there are many reasons why George W. bush and Tony Blair shouldn't declare war on Iraq. One of the main reasons is that it's illegal for Bush and Blair to go to war with Iraq. The War Powers Resolution only authorizes the president to use force against those involved in the September 11 attacks. It clearly states, "The president is authorized to use all necessary and appropriate force against those nations, organizations or persons he determines planned, authorized, committed or aided the terrorist attacks that occurred on Sept. 11, 2001, or harboured such organizations or persons." So far, no evidence has been presented implicating Iraq in the 9-11 attacks therefore if Bush declares war then it would be a war crime because it's broken the law. Now let me start with the main reasons why I think the United States is going to have to go to war, why it is necessary and why it would be in some senses positive to go to war. ...read more.

as many as one million Iraqis, many of them in the most horrific circumstances imaginable- as a result of chemical warfare of the most inhumane forms of torture that the world has seen over the last one hundred years. The torture is so bad that it can only be compared to the World War 2 dictatorship of Stalin and Hitler Everything your saying is true, so why hasn't anything tried to be done before apart from the gulf war, which was over 10 years ago. I believe that George Bush is trying to finish off what his father couldn't do, finish off Saddam Hussein. I also believe that bush only wants to go to war to establish control over the production and distribution of its oil and gas resources. Iraq happens to be the 2nd largest source of oil in the world. Furthermore, control of Iraq, either directly or indirectly through a U.S. imposed puppet regime would provide the U.S with stable access to it's northern and southern oil fields; and also provides the U.S. oil companies with favourable access to oil production sharing agreements Yes but Saddam hasn't for filled all the criteria that the united nations set for him, therefore indisputably shouldn't we make him pay, before he goes completely mad and tries to overtake neighbouring countries. ...read more.

Civilians always die in wars. It may be in the thousands. But, Hussein is already killing thousands of them and will continue to do so. At least when the US attacks Iraq, they will not be deliberately targeting and attacking civilians. Unlike Saddam who has deliberately targeted civilians on a huge scale and who has used chemical weapons on civilians, all the civilian deaths that will occur as a result of US attacks will be accidents. At least there is a chance that the killing of civilians will stop when the US wins. War is not the only answer, I believe if Tony Blair and George Bush really cared about there people and all the Iraqis then surely they can co-operate with the united nations to find another way to deal with Saddam Hussein instead of diving in at the deep end willing to kill thousands and ruin life's Finally I believe................ Finally I believe that there is always another way out, war is never the answer and surely if tony blair is the people's priinister then surely he can hear what the 69 million plus people are telling him and not what his little war monger friend George Bush is whispering into his ear. ...read more.