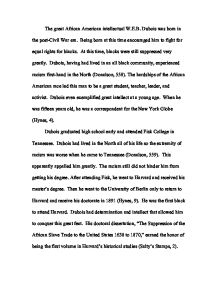 The great African American intellectual W.E.B. Dubois was born in the post-Civil War era. Being born at this time encouraged him to fight for equal rights for blacks. At this time, blacks were still suppressed very greatly. Dubois, having had lived in an all black community, experienced racism first-hand in the North (Donalson, 558). The hardships of the African American race led this man to be a great student, teacher, leader, and activist. Dubois even exemplified great intellect at a young age. When he was fifteen years old, he was a correspondent for the New York Globe (Hynes, 4). Dubois graduated high school early and attended Fisk College in Tennessee. Dubois had lived in the North all of his life so the extremity of racism was worse when he came to Tennessee (Donalson, 559). This apparently appalled him greatly. The racism still did not hinder him from getting his degree. ...read more.

He had to be tenacious and goal-oriented to make such accomplishments. In 1903, Dubois published The Soul of Black Folks (Salty's Stamps, 4). This book illustrates how demeaning it is for blacks to beg for basic rights that inherently belong to them. This book encouraged him to meet with black scholars whom he named the "talented tenth." In 1905, he began to meet with these scholars to discuss civil rights issues (Lewis, 1). These meeting were known as the Niagara Movement (Lewis, 1). After five years of meeting the NAACP was formed and Dubois was Director of Publicity and Research (Lewis, 1). In 1919, he sailed to France to be an NAACP observer of the Peace Conference (Lewis, 2). While in France he decided to form four Pan-African congresses which failed. Dubois did not gain very much support in his fight for civil rights. He was opposed to the ideas of people like Marcus Garvey who wanted blacks to go back to Africa. ...read more.

This caused Dubois to be indicted on charges of being a USSR agent. He was acquitted of these charges. In 1958, Dubois traveled to China and Russia and received the Lenin Peace prize (Salty's Stamps, 8). He eventually joined the American Communist Party and moved to Ghana. Apparently tired of the hardship and little support, he renounced his American citizenship and remained in Ghana until his death. The life and death of William Edward Burghardt Dubois was ironic. He was not recognized as a civil rights leader despite his accomplishments. He was highly disliked because of his view. Dubois was extraordinarily unique because he was a black communist. At his death, few Americans attended his funeral or acknowledged his death. Just as in modern society, people disliked him because he was different. He did not want to go back to Africa but he wanted equality with whites at his home. He challenged the minority to stand for change and not take the beating or run to Africa. W.E.B. Dubois was a great intellectual who challenged blacks to stand up for their rights instead of begging for them. ...read more.