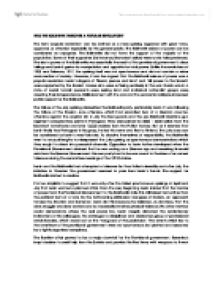 WAS THE BOLSHEVIK TAKEOVER A POPULAR REVOLUTION? The term 'popular revolution' can be defined as a mass uprising regarded with great favor, approval, or affection especially by the general public. The Bolshevik seizure of power can be considered as unpopular. The Bolsheviks did not have the support of the majority of the population. Some of their supporters (for instance, Kronsdadt sailors) were under false pretences. The rise to power of the Bolsheviks was essentially the result of the provisional government's clear failings and Lenin's genius for manipulation and appetite for total power. Unlike the revolutions of 1905 and February 1917, the uprising itself was not spontaneous and did not contain a wider cross section of society. However, it can be argued that the Bolshevik seizure of power was a popular revolution. Lenin's slogans of 'Bread, peace and land' and 'All power to the Soviets' were supported by the Russian masses who were suffering endlessly in the war. Russia was in a state of social turmoil: peasants were seizing land and individual nationalist groups were asserting their independence. Disillusionment with the war and the economic collapse increased public support for the Bolsheviks. The failure of the July uprising discredited the Bolshevik party, particularly Lenin. It was following the failure of the Russian June offensive, which had provoked fear of a German counter-offensive against the capital. ...read more.

Kerensky's inept decision to seek help from the Soviets and provide the Red Army with weapons to thwart Kornilov proved to be a fatal error. The Bolsheviks were in power once again. Although the Provisional government survived the Kornilov revolt, popular support for the government faded rapidly as the national mood swung to the left in the fall of 1917. Workers took control of their factories through elected committees; peasants expropriated lands belonging to the state, church, nobility, and gentry; and armies melted away as peasant soldiers deserted to take part in the land seizures. The Bolsheviks skillfully exploited these popular trends in their propaganda. Lenin's arguments for the need of an immediate rebellion were based upon the fear of a 'second Kornilov affair' and of a surrender of Petrograd to the Germans. With their slogan of Peace, bread and land, the Bolsheviks deliberately undermined the authority of the Provisional Government, thus hastening its collapse. In Petrograd the prevailing mood was bitter disillusion not revolution. The revolution in Petrograd had already received it's fatal wound in July, when the workers had risen demanding that the Soviets take power and set up an all socialist government, only to be suppressed with troops raised by the Soviet itself. Even in Moscow there was little enthusiasm for a seizure of power. ...read more.

Since there were no forces to fight for the Provisional Government, the Bolsheviks had almost nothing to overthrow. As Lenin himself put it, the Party "found power lying in the streets and simply picked it up." The belief that the October/November revolution was a popular uprising was promoted in successive Soviet governments up to the fall of USSR in 1991 for a number of reasons. Firstly, it was important to legitimise the Soviet regime. Lenin was glorified as a great national leader. Secondly, the Soviet regime saw itself as the model for any future socialist society. In 1945, Soviet Union became involved in a cold war with the USA and the West and with both sides trying to prove their superiority, the use of such propaganda became even more important. In conclusion, the October Revolution can be described as an "armed insurrection" carried out by the Bolshevik Party using the apparatus of the Petrograd Soviet. If one were to look at the events following October revolution, it would be safe to conclude that the Bolsheviks didn't plan to form a coalition government. Lenin planned to rule alone and maintained power through the use of political terror and repression. Due to a thirst for political power and through the means of deception and false promises for a better life, Lenin successfully established himself as a dictatorial leader of the Russian people. Therefore, the October revolution of 1917 can be considered as a classic coup d'�tat. ...read more.