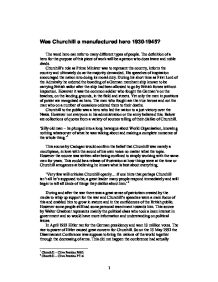 Was Churchill a manufactured hero 1930-1945? The word hero can refer to many different types of people. The definition of a hero for the purpose of this piece of work will be a person who does brave and noble deeds. Churchill's role as Prime Minister was to represent the country, inform the country and ultimately do as the majority demanded. His speeches of inspiration encouraged the nation into doing its moral duty. During his short time as First Lord of the Admiralty he ordered the boarding of a German merchant ship known to be carrying British sailor after the ship had been allowed to go by British forces without inspection. However it was the common soldier who fought the German's on the beaches, on the landing grounds, in the field and streets. Yet only the men in positions of power are recognised as hero. The men who fought are the true heroes and not the man who on a number of occasions ordered them to their deaths. Churchill to the public was a hero who led the nation to a just victory over the Nazis. However not everyone in his administration or the army believed this. Below are collections of quotes from a variety of sources telling of their dislike of Churchill. 'Silly old man - he plunged into a long harangue about World Organisation, knowing nothing whatsoever of what he was talking about and making a complete nonsense of the whole thing.'1 This source by Cadogan would confirm the belief that Churchill was merely a mouthpiece, in love with the sound of his own voice no matter what the topic. However the source was written after being confined to simply working with the same men for years. ...read more.

When the Altmark a German merchant ship known to be carrying captured British sailors was spotted two destroyers were sent to intercept the vessel. En route two Norwegian gunboats that had claimed to inspect the vessel approached the destroyers. At that the destroyers withdrew. Churchill knowing the Norwegians were trying to remain neutral may have lied about the contents of the Altmark. So he dispatched two destroyers to board the vessel. Once intercepted the Altmark was boarded and in the hull were 299 British sailors. This showed that Churchill had a strong will as was prepare to alienate the Norwegian government to save British sailors. His decisive decision of boarded the Altmark showed he was prepared to make important decisions quickly. This attribute allowed him to bring about success and so heightened his status to hero. In 1939 the Nazi-Soviet pact gave Hitler the green light for the conquest of Europe with only Britain and France standing against him. Churchill saw that Germany could cause a problem for the British Empire. So after his long search for British isolation Churchill started to believe an Anglo-French alliances should be basis of wider anti-German grouping and justified through the League of Nations principles. Churchill eventually realised the only way to deal with Hitler was to confront him. However, this was to late to prevent Hitler from building up his forces for the greatest war to date. The phrase 'better late than never' comes to mind if it had taken any longer Hitler may just have won the war. On the 26th May 1940 the operation to evacuate troops from Dunkirk began. It was thought only 45,000 troops would be evacuated. By the 30th the first estimation before the operation had started had been exceeded with a 120,000 evacuated including only 6,000 French troops. ...read more.

'Nothing to offer but blood, toil, tears and sweat'7 Churchill needed to get the message across that the road ahead was long and hazardous. This speech told the people that many would die, the fight would be hard and numerous hardships would fall on the people but they would be doing the right thing, ridding the continent of an aggressive nation. The speech showed both grit and determination and with Churchill's customary cigar the symbol of this. 'Never in the field of human conflict has so much been owed by so many to so few'8 The speech praised the RAF for their achievement at winning the Battle of Britain. Thus it was the first major victory of the war. It would have been well published and would certify that everyone's efforts were of vital importance. This was not Churchill achieving anything himself but a publicity stunt to show himself as the great leader. In the end Churchill did the job his position required. Every person who did their job in World War two are heroes. However Churchill's status of hero is well known due to his position. He would be the one heard on the radio and seen in the newspaper. His speeches won over not just the British public but also the American and the Russia government. Thus enabling the Allies to win the war. During the war Churchill did make military blunders but in every war set backs are evitable. However his order to fight to the death showed however he was a hypocrite as he sent men to their death he remained in his plush accommodation. If the public had known his status of hero would have been seriously damaged. So Churchill did have military and political success that led to him becoming a hero. Nevertheless not all details of his efforts were released and so he was and is a manufactured hero. ...read more.