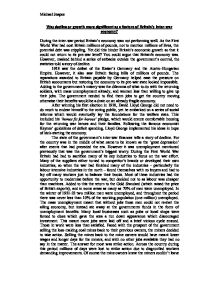 Was decline or growth more significant as a feature of Britain's inter-war economy?

Was decline or growth more significant as a feature of Britain's inter-war economy? During the inter-war period Britain's economy was not performing well. As the First World War had cost Britain millions of pounds, not to mention millions of lives, the potential debt was crippling. Yet did this hinder Britain's economic growth so that it could not return to its pre-war level? You could argue that Britain's economy was. However, masked behind a series of setbacks outside the government's control, the statistics told a story of decline. 1918 saw the defeat of the Kaiser's Germany and the Austro-Hungarian Empire. However, it also saw Britain facing bills of millions of pounds. The reparations awarded to Britain payable by Germany helped ease the pressure on British accountants but restoring the economy to its pre-war state looked impossible. Adding to the government's misery was the dilemma of what to do with the returning soldiers, with mass unemployment already, and women less than willing to give up their jobs. The government needed to find them jobs to get the country moving otherwise their benefits would be a drain on an already fragile economy. After winning his first election in 1918, David Lloyd George did not need to do much to endear himself to the voting public, yet he embarked on a series of social reforms which would eventually lay the foundations for the welfare state. This included his 'homes fit for heroes' pledge, which would ensure comfortable housing for the returning war heroes and their families. ...read more.

Many other key industries came out in support of the miners and the country and its economy ground to a halt for over a week. This lost even more markets, and saw even more miners laid off partly in revenge acts by the owners and partly due to the loss of overseas markets to more reliable sources. The economy at this point was in dire straights. In 1931 the government had to decide whether to come off of the Gold Standard. The average worker did not normally care about the Gold Standard, but as this decision was so soon after the Wall Street Crash and the country was in economic turmoil, the decision was crucial. Traditionally the Gold Standard had been seen as a sign of strength and stability so when the decision was made to remove Britain from the Gold Standard a number of people became scared. In the immediate future it seemed like a bad move as it only led to more unemployment but the gamble paid off in the long run. Immediately after the war the government was faced with the task of re-cooping the money that it had lost during the war effort. The main method of regaining their money followed the Keynesian principles of deficit spending, whereby the government borrowed huge sums of money and then invested it, and then paid back their loans. The economy benefited from this and started to pick up. However, as a direct result of this borrowing scheme inflation started to rocket, but not on the same scale as Germany was seeing at the same time. ...read more.

One of the key companies in this industry - and in the world today - was ICI. Although unable to single handedly solve the unemployment problem, many thousands of people found work in this industry. On the back of the chemical industries' success, many other industries grew. As Michael Rose writes: 'Even employment in this decade of unemployment increased by 17%.' This, coupled with the Welfare State schemes, brought about a rising standard of living. After the deflation which followed the First World War many items were easily affordable and many found themselves increasingly richer, although still in the working class. Inevitably a gap opened between the employed and unemployed working class, which made getting a job all the more imperative. To further widen the gap, many wages increased - although not dramatically - to further widen the working class gap. The new Welfare State meant that more and more people were able to seek employment. Rising employment meant that a higher percentage of the work force was being employed, but as the work force was always expanding the actual figures for employment remained roughly the same. With the after-effects of the First World War still affecting the economy it was always going to be hard to maintain a sustained period of growth. The first four years after the war looked promising with the post war boom, but that was short lived. Increased overseas competition and two decades of mass unemployment meant that while some growth did occur, the effects of WWI were deep rooted. It would take a lot more for this period to be considered a period of total growth, and shake off the legacy of the First World War. Michael Jeapes ...read more.