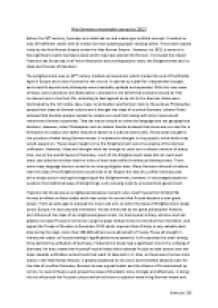 Was Germany a meaningful concept by 1815?

﻿Was Germany a meaningful concept by 1815? Before the 19th century, Germany as a state had no real meaning or political concept. It existed as only 314 different states with 23 million German speaking people residing within. These were loosely ruled by the Holy Roman Empire under the Holy Roman Empire. However, by 1815, a series of a few significant events had taken place which may have altered this forever. It included the impact Frederick the Great had, the French Revolution and the Napoleonic wars, the Enlightenment and its ideas and the war of liberation. The enlightenment was an 18th century intellectual movement which marked the end of the Middle Ages in Europe and a loss of power for the church. It opened up a path for independent thought, and scientific aspects and philosophy were drastically updated and expanded. With this new wave of ideas, came Liberalism and Nationalism. Liberalism is the belief that everyone should be free to choose how to live their life, according to laws agreed on by all. As the German states were dominated by the rich noble class, many rural dwellers and farmers took to these ideas. ...read more.

They saw that the enlightenment was not all perfect. This is as they wanted to preserve there state as they didn?t want to be in danger and had strong German leaders that prevented this from happening. It made the individual states stronger rather than weaker preventing unification. Also there was less publication of the works from the Enlightenment in Germany as there was language diversity and many couldn?t read and there was mass censorship. Some states were also happier with the situation they were in and had a conservative view in not wanting to change something that was working fine. As well as this, many states would rather steal more land then revolt. A main point in why Germany could not unite sooner was because each state had its own ruler, so therefore lead to many different types of leaders who had their own ideas and opinions. It would have been difficult to co-ordinate such a vast difference. These leaders also enforced repression and even though the question of what being German meant was brought in, no-one had a straight forward answer to it as there was a vast amount of different culture and religion. ...read more.

However, if it was a physical possibility by 1815 is a different matter. If the French revolution had not occurred, or if it was a success rather than a tyranny, then maybe the unification of Germany would have occurred sooner than it did. However if it had not, then the German states may have never bothered to try to unify. It was only under Napoleons reign that the beginnings of an actual German unity began, after he re-organised the states. The war of Liberation also had a huge impact. It allowed, for the first time, the Germans states, especially Austria and Prussia, to work together towards a common goal. It showed that the possibility of a German unity may not be as farfetched as it sound. But as long as there remained two leading states who both wanted power, the German States would never have been able to unify. The fact that there aims were both different, Austria didn?t want a unity at all, reinforces this. Nether the less, by 1815, a framework was in place, known as the German confederation, which allowed German states to co-exist with each other, rather then it the unification being just an idea being spread. Olivia Liu 13E ...read more.