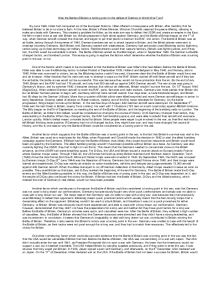 Was the Battleof Britain a turning point in the defeat of German in World War Two?

Was the Battle of Britain a turning point in the defeat of German in World War Two? By June 1940, Hitler had conquered six of the European Nations. Hitler offered to make peace with Britain, after deciding that he believed Britain to be in no state to fight. At the time, Britain's Prime Minister, Winston Churchill, rejected the peace offering, refusing to make any deals with Germany. This created a problem for Hitler, as his main aim was to defeat the USSR and create an empire in the East. He felt no need to be at war with Britain too. Britain prepared to fight alone against Germany, and the Battle of Britain began on the 1st of July, when German aircraft crossed the channel, and began to put their plans to destruct the RAF, into action. The Battle of Britain was an air battle, lasting through the summer of 1940. German bombers set out to attack targets in Britain, and the British planes were sent to intercept incoming Germans. Both Britain and Germany started with weaknesses. Germany had previously used Blitzkrieg tactics (lightning tactics using up-to-date technology ad military tactics. Reinforcements would then capture territory.) Britain was fighting alone, and if they lost, the USA would be vulnerable to attack. The Battle of Britain ended as the Blitz began, when in September 1940, the German Luftwaffe changed tactics, and bombed London. This essay is going to explore the factors which determine whether the Battle of Britain was a turning point in the war, or not. One of the factors which needs to be considered is that the Battle of Britain was Hitler's first real defeat. ...read more.

Germany was unable to cope with the length of the Battle of Britain, as their tactics were not good enough for a long war, and they had to stretch their resources. This effectively led to the victory for Britain. One other contributing factor which could also provide evidence that the Battle of Britain was a turning point in the war was the fact that the USA would be vulnerable if Britain had lost. Before the Battle of Britain, the USA was concentrating on a war with Japan. The USA didn't actually enter the war until 1941, as President Roosevelt did not want a war with Germany. He knew that the Americans would not support a war, but it seemed inevitable. The USA helped Britain by sending supplies previously, and if they were to enter the war, it was obvious that they would join Britain. In 1936, Japan signed a pact with Germany, and afterwards, on the 8th December, USA declared war on Japan. On the 11th of December, Hitler declared war on the USA. If the Battle of Britain had not been a success for Britain, Britain would have been occupied by Germany, who could have then used it as a base for attacks on the USA. Also, if Britain had lost, the USA would be fighting alone, as the Germans had a pact with Japan. Without the victory for the Battle of Britain, the Allies may well have lost World War Two, as the USA would be vulnerable to attack, and Germany would occupy most of Europe, and Britain included. Another factor which helps determine whether the Battle of Britain was a turning point in the war is the fact that Britain improved their tactics. ...read more.